Away win for Walterstown in Round 11 of the League 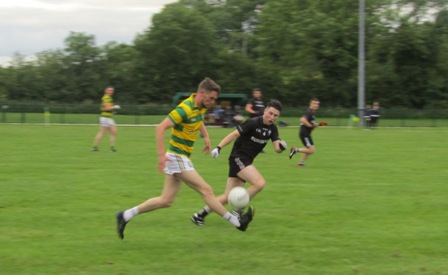 Walterstown arrived in Syddan on Fri evening looking for a win after a couple of poor results. Syddan started well and were 2 points to 0-1 ahead after 10 minutes. Walterstown then conceded a penalty in the 12th minute which Syddan converted. After 25 minutes Walterstown had clawed themselves back thanks to 3 points apiece from Brian O’ Connell and Cormac Madden. Alan Wall and Davy Donnellan also added a point each. However Syddan scored a well worked goal before half time and Walterstown found themselves behind by 2-5 to 0-8. 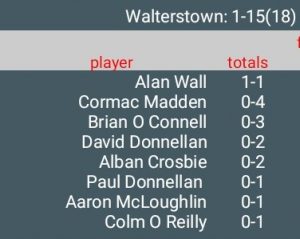 In the second half Walterstown scored the opening points thanks to an Alban Crosbie free and a Paul Donnellan point. After 10 minutes Walterstown were again level with Syddan. Aaron Mc Loughlin put Walterstown ahead with a nice individual point. With 20 minutes gone in the second half Brian O Connell found Alan Wall who made no mistake for Walterstown’s first goal. Syddan did score 2 more points and Walterstown’s defence had to be alert as Syddan sought a late goal. But a point from Colm Reilly and Cormac Madden’s 4th from play, left the Blacks winning by 3 points.