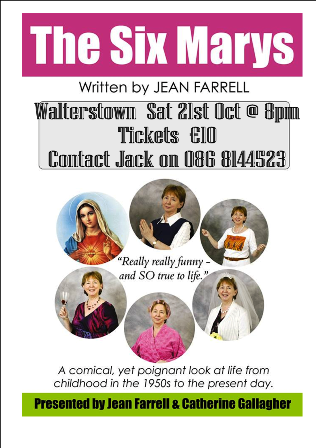 Speaking with Dave Fanning on The Ryan Tubridy Show, Jean said that during her childhood in Athlone ‘self esteem had not been invented yet…’

Jean became a teacher and a mother in the 1970’s and started exploring her creative side, opting to write under a pseudonym because, as she admits, she was worried people would think ‘Who does that one think she is? She’s awful stupid’.

It wasn’t until the 1990’s that Jean got ‘on her feet’ with regard to comedy.

A trip to see the legendary Joan Rivers further spurred on Jean’s comedic goals.  After writing down funny lines and ideas for years, Jean decided it was time to create her routine.

The Six Marys is a one-act play written and presented by Jean Farrell and is touring across Ireland.

“Mary White said that she asked her Ashling what she wants to be when she grows up. “An orphan,” her teenage daughter replied. “And the sooner the better.” In the 2000s diaries, Mary Grey announced “My husband is great in bed. He goes straight to sleep.”