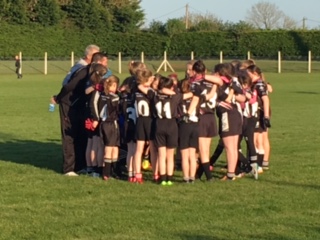 In a replay of last year’s Under 12B Final, St Colmcilles travelled to a sunny Walterstown on Friday evening for the 4th round of the Under 12 league. In a match played over four quarters, the Pilltown girls raced out of the blocks and playing some direct running football raced to a three point first quarter lead. The girls regrouped and in the second quarter kicked into gear and turned the game on its head. Goals win games and Zoe & Katie kicked one each to go in at half time five points up.

Halftime 2-2 to 0-3.
The third and fourth quarter were an excellent example of girls football.  One team battling back into the game in a desperate need to win. The other refusing to give way. Oohs and aahs were audible from the supporters as chances came and went for both sides
The Walterstown girls gave a great example of defending from the front with the half back and full back line standing tall and Maeve in goal excelling.
The game finished to a loud cheer with Walterstown girls victorious and a single score between the teams. Great credit to both teams on a stirring encounter.
Goals win games but so do clean sheets!
Well done Walterstown Under 12’s.
Friday 05/05/17
Share