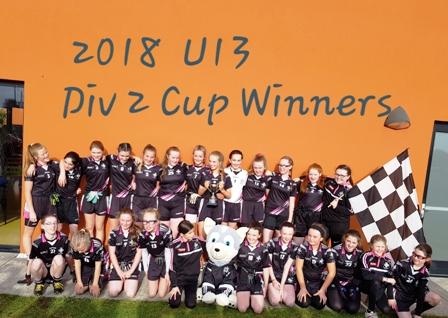 On a sunny November Sunday, Walterstown under 13 girls took on their near neighbours and rivals Simonstown in the 2018 Under 13 Division 2 Final in Dunganny. Finals can be nervy occasions for players of all ages but this set of girls showed little signs of any as they produced a performance that every girl in the squad can be proud.Both teams came through the group with strong performances, so much so they both qualified with a game to spare so did not have to play one another at the group stage. 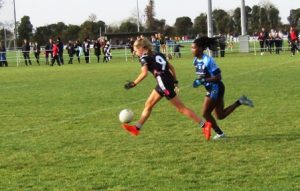 Knowing the opposition would be strong the Walterstown girls came out of the blocks quickly and raced quickly to 1-2 to 0-1 lead with a goal from Grace and frees from Zoe and Sara Jane.

Simonstown rallied and though games are won by great scores, it is a strong defence that builds the foundation of victory.. As Simonstown attacked they were repelled by Walterstown stubborn defenders, Emily and Abby and by some star goalkeeping from Maeve, who, on three to four occasions in the first half denied certain goals.

For every thwarted Simonstown attack, Walterstown responded with inspirational points from Tiarnach, and late clinical goals from Katie & Zoe. Each girl in black had given their all for the first 25 minutes and were reaping the reward with a half time lead.

Half time brought team huddles, oranges segments, and tactical advice from the management team and some squad rotation to keep energy levels high.

Simonstown came out as expected in the second half and again put the challenge up to the Walterstown girls. This was a challenge faced head on with great blocks and interceptions from Caoimhe & Ruby. Katie delivered a quick point and a well taken goal in response and the girls began to believe that the game was for them to win.They never dropped the levels of energy and team play from the first minute to the last and with further scores from Lucy, Sara Jane, Grace and Katie, Walterstown started to pull away. To Simonstown credit they never stopped but it was Waltersown’s day. 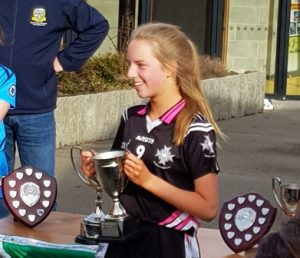