U14 Boys continue impressive form with win over Longwood/Clonard Longwood / Clonard made the long journey to Walterstown on the hottest day of the year so far to face the inform Walterstown U14 boys. Longwood got off to a better start , scoring 3 points to Walterstown’s one in the opening ten minutes. Walterstown eventually got going and a goal 19 minutes in by John Cullen helped Walterstown to go in 4 points up at the break.

Again Longwood had the better of the early stages of the second half , scoring a goal of their own. Adam Quinn got Walterstown’s second goal in a stage where Walterstown scored a goal and 3 points without replay.  A goal late on in the half wasn’t enough for Longwood to make any inroads and in the end the boys won by four points. 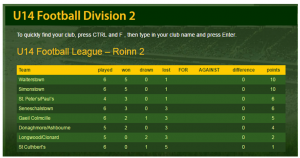