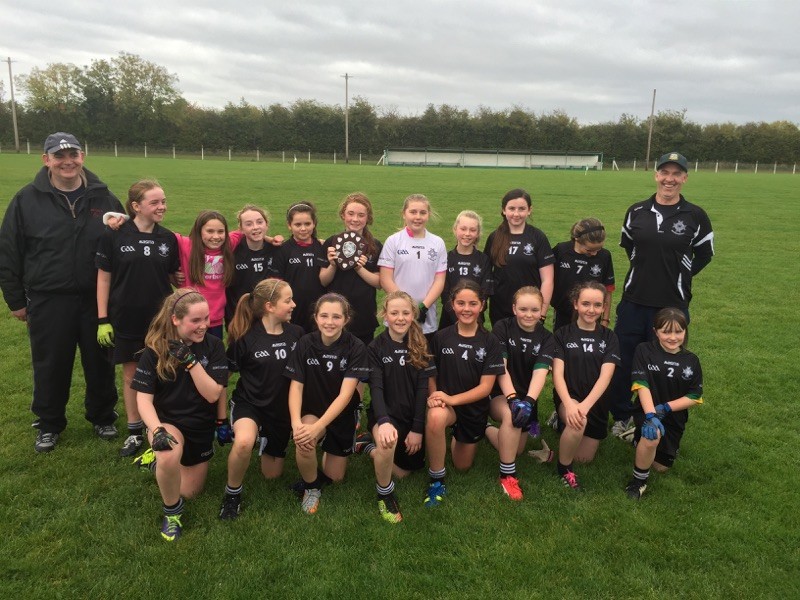 The Walterstown Girls Under 14B team travelled to Kells, for a fourth round league match with Gaeil Colmcille. Despite heavy rain prior to and all through the match, the playing surface was good and the two evenly matched teams went on to play out an entertaining and sporting game.

From the off, the Walterstown goalkeeper and her backs provided a solid platform for the team and they gave the home attack little or no encouragement in the early stages. This allowed the lively midfield and the mobile forwards to take the game to the opposition. However, the conditions meant that scores were hard to come by, with Walterstown having scored a goal, to the home team’s point, as the game approached half-time. Against the run of play, the hosts scored two quick-fire points, to level the match, just before the interval.

After the restart, the home team produced their best form of the match, scoring a goal and a point to hold a four-point advantage by the midway point of the second half. Whilst the non-stop rain and the fading light probably favoured the team in front, the Blacks took the game to the hosts, with a succession of attacks resulting in one goal to reduce the deficit to a single point and a second green flag to give the girls a deserved two-point lead. As the match entered the final 5 minutes, the home team responded with a counter-attack, which led to a goal to restore their one point lead (albeit with the travelling support questioning an apparently over generous interpretation of the ‘steps’ rule in the lead up to the score). Not to be denied, Walterstown went back on attack. The home team responded by implementing a ‘blanket defence’ that would have pleased Jimmy McGuinness and which halted a number of Walterstown attacks in or around their square. However, the overworked defence would commit one foul too many and the resultant free was coolly dispatched over the bar to level the scores. The referee then called a halt to proceedings, before either team had an opportunity to attempt what would surely have been a winning score.

Following the match, the girls re-formed their ‘Walterstown Huddle’ and received deserved congratulations from the proud (but very wet) coaches and supporters.

For the record, the girls now have two draws and two defeats from their four games. However, anyone in attendance at those matches will know that this could just as easily have been three wins from four, from a very young panel, with every one of the girls eligible to compete at this grade again in 2017 and with many of the panel also eligible to play Under 12 this year.

Thanks to Mark McGuire for the report.