U14 Win in first round of the Summer league 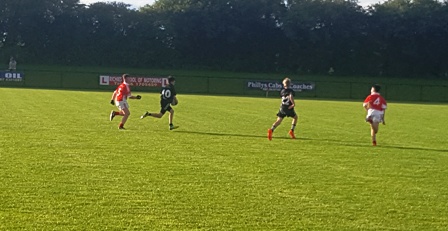 On Thurdsay the 6th of July the U14 Boys traveled to Trim to take part in Round 1 of the Summer league. This was the first game that the lads played in Division 1. The lads got of to a flyer ,scoring the first 2 points and an Andrew McConnell goal within the first five minutes to give them a good head start. In fact Walterstown controlled much of the first half, with John Cullen dispatching the frees, and the defense were rarely threatened by Trim. Adam Quinn got Walterstowns second goal as the headed in at the break 12 points to the good.

After the break Walterstown made several changes as all the squad got a good run out. Again Walterstown were on top of things from the start, with an opening point and a goal four minutes in from Byron Farrell. Trim converted  two points  and a goal in a row as they started to come back into the game. 12 minutes in a trim got their second goal of the game but this was cancelled out a minute later with Byron Farrell’s second goal of the half. The goals were suddenly flying in, as Trim immedatley scored from the re-start, and added their third goal a minute later. Trim were now on the ascendancy and despite outscoring Walterstown in the second half the failed to real them in, as Walterstown held on for a 4 point lead.

Next up for the lads is a home game to Dunsaughlin on Friday 14th.