U16 Classic in Gerry Reilly Final but disappointment for Adam, Conor , Adam & Joe 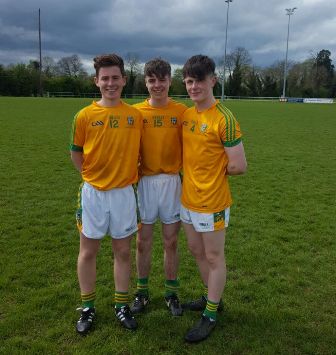 The stage was set for the Gerry Reilly U-16 FT Cup Final in Millbrook, Oldcastle on Sunday evening with the singing of our National Anthem by Ann Galligan, and a large crowd in attendance awaiting a great encounter despite all the heavy rain of the day. Monaghan all out to win the Cup for the first time and Meath out to bridge a 10 year gap since their last win.

A dream start by Monaghan scoring 2-2 without reply laid the foundation for their victory who adapted much better to the wet conditions. David Irwin’s opening point for followed up by his goal could not have been what Monaghan expected at this early stage. Meath were unlucky with their first attempt of a score coming off the post.  Sean Jones got Monaghan’s second goal after a mishit free followed up with a Donnach Swinburne point to have Monaghan up by 8 points.

Luke Mitchell opened Meath’s account from a free on 14 minutes. Monaghan  responded with a point at the other end, which turned out to be their last score of the half.Meath were now coming more into the game and added 3 points to their tally,  including 2 points from Luke Mitchell (1f)  to leave 5 points between the sides at the break.

Mitchell hit the opening score of the second half, also from a free, but Monaghan stretched their lead 2-6 to 0-5 following a trio of points from the impressive Aaron Mulligan. Meath were unlucky with Luke Kelly’s shot on goal going wide off the post in this spell.
Points from Oisin McCloskey and Luke Mitchell (f) narrowed the gap between the sides. Luke Kelly’s  brilliantly taken goal on 46 minutes had Meath back in with a great chance of winning.

Crucially Monaghan replied to that score with a point from Mulligan (f) who accounted for all of his sides second half tally.,
Substitute Ian Birmingham reduced the deficit on 49 minutes. Meath had a goal chance soon after,  but the lead was back to three after Mulligan hit his sides final score in the 53rd minute. Meath at this stage were looking for goals, and as it turned out, points would have been sufficient to at least force a draw.

Meath had momentum with them in the closing stages and had late points from Mitchell (free) and Colin Hawdon, but they were unable to force an equaliser as Monaghan held on for their first Gerry Reilly Cup win. Monaghan’s Aaron Mulligan was presented with the RESPA ‘Man of the match’ award by Bobby Kellett (Kelletts Oldcastle Ltd)