Under 21’s bow out early of Championship 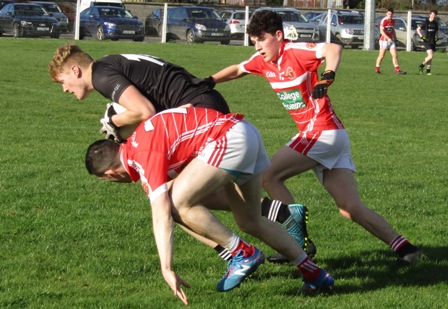 The Blacks headed to Castletown on a fine autumnal afternoon to face Monalty in the first round of the Under 21 championship.

Monalty registered the first point of the game with barely a minute gone. They quickly followed this with another attack, a fine shot on goal which was initially well saved by Walterstown keeper Daniel Murphy, who was powerless with the rebound as Monalty reacted quickest and placed the ball in the net. Monalty kept the pressure on and after five minutes Walterstown were already 5 points down. Brian O Connell and Conor Lenehan reduced the lead back to three points, albeit only momentarily as Monalty added on another three points and brought another good save from Daniel Murphy. Walterstown were getting a little more into the game, with Mark Foy starting to win several marks from the kick out. And it was some of Marks pressure that lead to Brian O Connells gaol twenty minutes in. Brian however hurt his hamstring and was replaced by brother Barry. Stephen Davis scored Walterstowns last point of the half but they went in at the break eight points adrift as Monalty grabbed their second goal of the game just before the break. 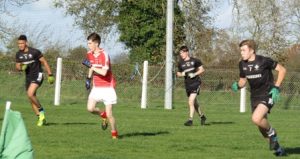 Stephen Davis scored quickly after the break with a fine point. Four minutes into the second half Monalty were awarded a penalty, but failed to convert it as once again Daniel Murphy pulled off another fine save. Conor Cullen got a black card shortly afterwards, and was replaced by Adam Treanor, Monalty pointed from the resulting free. Monalty scored two goals in two minutes shortly afterwards which left the blacks with a real mountain to climb.   Adam Treanor got Walterstowns second goal of the game half way through the second half after some good build up play from Cathal McGuinness. Cathal was again dragged down toward the end of the half, as Monalty were reduced to twelve, and Adam Treanor calmly put the resulting penalty away. The spoils however went to Monalty who progress the next round.