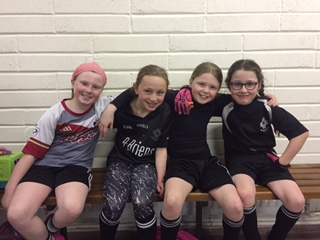 Game three of the league and the U12 girls are going from strength to strength.  It was a lovely evening in Trim – overcast and a little chilly, but dry and plenty of great football to warm the spirits.

The sides were close in the first quarter with Trim giving as good as they got to keep the teams neck and neck with 1 goal and 1 point each at the end of the first 10 minutes.  Sarah Jane and Zoey once more played energetic and dexterous football with Sarah Jane running marathons throughout the game.

The second quarter was tight again with all the players, including Abbie Farrelly, Ruby Rodgers and Keelin Foy, fighting hard to defend, tackle and drive the ball to their opponents end on the pitch.  Spectators from Walterstown and Trim cheered the girls on and the Walterstown supporters got a little overexcited at one stage as they noticed Lucy running towards her own goals with the ball before making a u-turn and blasting the ball back towards the Trim end.

It was really in the third quarter that Walterstown pulled away from Trim.  Trim failed to score in this quarter while Walterstown continued to add to the score sheet with now a total of 3  goals and 7 points to Trims 2 goals and 2 points.  Sadie McCarthy scored a great point and Grace Deegan kicked the ball just past the goal line towards the goal keeper, but enough to proclaim the score an own goal by Trim.

Both sides battled on in the fourth quarter, with Trim seeming to have three players to our one on the ball at times.  However, a fantastic leg stretching goal save by Meabh McCarrick and strong defending by Emily Reilly, Rebecca Roche and Mia McGovern kept the team on track, while persistent tackling and precise kicking by Aine Downes won her back the ball time and again and showed off her abundant abilities for such a young player.

Indeed, all the u10 players deserve a special mention for the enormous addition they make to the team.  Caoimhe McKenna, Kayleigh Maher, Amy Behan and Aine Downes – well done on your tremendous persistence and determination – it is with the contribution of your attitude, skill and team spirit that this team will continue to succeed in their goal to become the Meath D2 u12 girls champions of 2017!!