Walterstowns Girls day out in Croker for Ladies Final 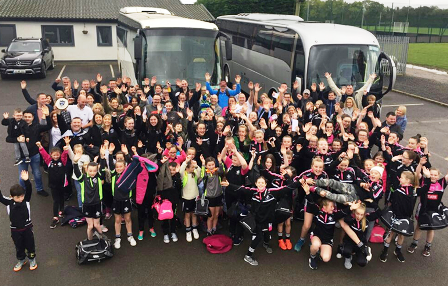 Ladies’ All Ireland Final day took place last Sunday, 24th September, in Croke Park.   Through the mammoth organizational task undertaken by Manager Joey Farrelly and his coaches – 79 girls from the U11, U12, U13B and U14B Walterstown teams, along with 57 adults were amongst the record breaking 46,286 crowds in attendance at the match.  Addressing the expectant crowd, Dáithí Ó Sé revealed that this year’s finals had brought an astonishing increase of over 10,000 on last year’s record.

For the Walterstown girls and their parents not only did they get to attend the Dublin v Mayo final, they had much more fun in store… 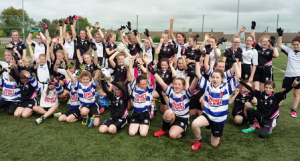 It began with a gathering in Walterstown GFC at 9:00am.  Joey was initially hoping to fill a 53 seater bus….little did he anticipate 136 going!!  The two full buses, plus a few cars in convoy, first headed for Parnells GAA club in Coolock.   The girls were divided into 4 teams to play 2 full matches against each other.

The U11 Team 1 Manager was Kate McCarthy with selector Kevin Meehan.   The Team 2 Manager for this age group was Thomas McMahon with selector Niall Boland.  The girls played brilliantly although some of the decisions made by referee Kevin McKenna were a little dubious to say the least!!  But it was all in good fun and the girls had a great laugh.

Team 1 Manager for the U14’s was Niamh Harte with Selector (and husband) Chris Harte – the dynamic duo!  Team 2 Manager for this group was Brendan Murphy with Selector John Lyons.  Again the girls really got stuck in – so much so that referee Joey Farrelly had to issue a few yellow cards!!  Again, some very questionable refereeing…but it was very entertaining.

After the matches, everybody went into Parnells clubhouse for a delicious carvery lunch.  Tummies full, the gang all re-embarked onto the bus and headed for Croke Park. 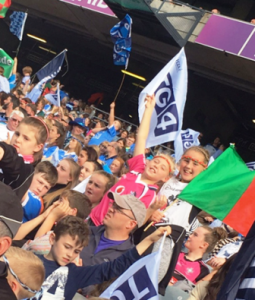 The Dublin v Mayo match kicked off at 4:00pm.  There was serious banter between all the girls with many donning the blue colours of Dublin and as many more wearing the red and green of Mayo.  There were girls chanting for Mayo who never set foot in the county!  Again it was all in good sport and the atmosphere was only slightly dimmed when the Dublin ladies’ team deservedly ran away with a stupendous win of 4-11 to 0-11.  It was amazing to watch all the ladies play with such skill, determination and fitness levels – real role models for the Walterstown girls.

With the day almost over, the two “party buses” (that is what they sounded like!) stopped in Supermacs on the way home for a final treat before arriving back to Waltertown at around 9:30pm.  Everybody had a fantastic day and a huge thank you goes out to Joey Farrelly, Kevin McKenna, Niamh Harte and all those involved in organizing such a memorable day.