Win for Blacks in final outing in the League 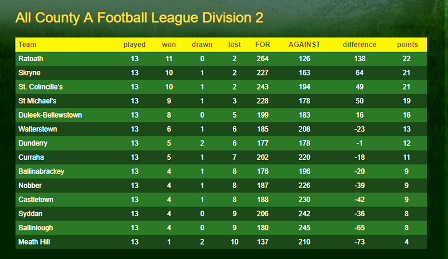 Walterstown Vs Castletown —A League

In the second half Castletown fought gamely but Walterstown’s forwards continued to notch up the scores. Wing forward Aaron McLoughlin finished with a personal tally of 1-2 from play while full forward Ruairi o Dowd was in fine form scoring 0-5 also from play. Brian O Connell added  1-5 for Walterstown while the industrious Cormac Madden chipped in 0-2.

While Castletown scored 1-10 in the second half there was always a 10 or 12 point gap between the teams until Castletown’s last minute penalty narrowed the gap to 9 points. The final score was 2-18 to 1-12 when referee Sean Gahan blew the final whistle.