All square in B League encounter between Rathkenny and Walterstown 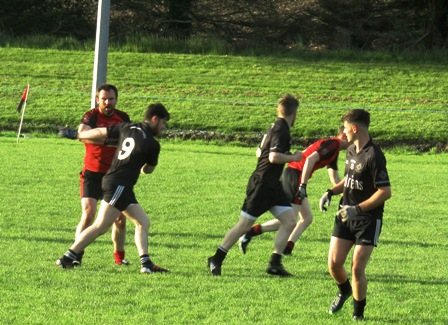 On a fine May evening Walterstown travelled to Rathkenny for the latest round of the B League.

Walterstown began with  a starting line-up including Cormac Madden, Kevin Devin and Paddy Donnellan up front and also welcomed back John Moran to the starting line up. Paul Donnellan was the first to register a score 2 minutes in, followed 2 minutes later with a point from Michael Clarke. Walterstown had the upper hand in the first half, Kevin Devine was proving a useful target man, with some good fielding, setting up several scores for his team mates. The first goal opportunity for either side fell to Rathkenny, 18 min’s in, but they were denied by the post.  As Pat Clarke blew the whistle for half time, Walterstown had a four point lead. 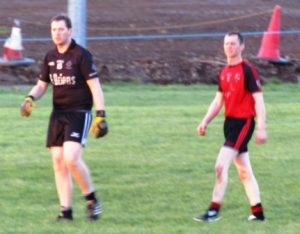 Something you don’t see everyday, Ciaron Lydon at R.F.F

After the break, Rathkenny were first to open the scoring. Four minutes in they almost drew level, when in a good break they had rounded the Walterstown Keeper, Darragh Keegan, and shot for goal only to be thwarted by and outstanding goal line save from Walterstown’ s  centre back Dan Halligan. Cormac Madden was the first to score for Walterstown, seven minutes into the second half with a fine point.  Rathkenny responded with two points of their own.  The goal Rathkenny had threatened to score came 18 minutes in, and meant now that the game was all square. Points from Paul Donnellan and Joey Coogan did restore the blacks lead only for Rathkenny to cancel them out in the final few minutes.

Walterstown will probably be a little disappointed with the draw having lead for most of the game, and face a quick turnaround as their next game is on Monday 14th in Walterstown against St Michaels @ 7:30.