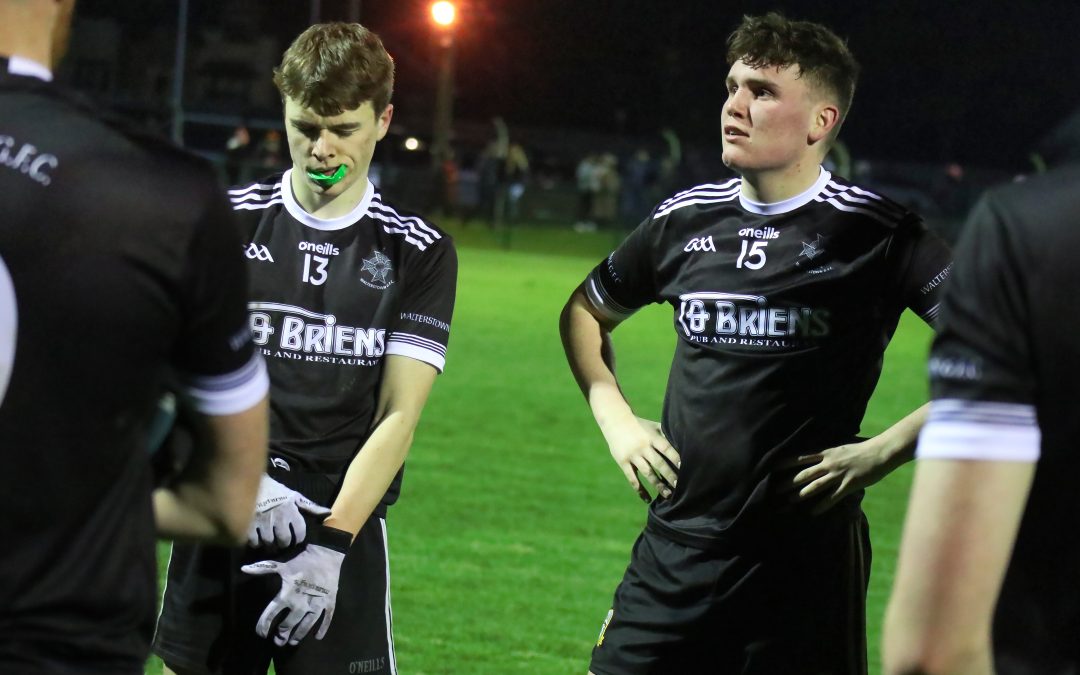 Season 2022 is firmly up and running and Walterstown got off to a winning start when they overcame Dunshaughlin away on Friday night. The host were hotly fancied to take the points but a young Walterstown side dug deep after a shaky start to run out victors with eight points to spare.

Indeed the Blacks conceded 2-2 early on and the writing appeared to be on the wall for last year’s Intermediate Football Championship semi finalists. However, they sprung to life thereafter and it was their young guns who came to their rescue. Both 17-year-old Byron Farrell and Adam Quinn scored a combined total of 5-2 as the Blacks outclassed the home side after their poor start.

In all, Walterstown, under the guidance of Neil Reynolds, handed debuts to five players in the early season cup competition. In defence Lorcan O’Connor lined out at left wing back, while Ross Reynolds started in the half back line. In attack another 17-year-old, Ciaran Cox, started, along with the aforementioned Farrell and Quinn.

However, the emerging Blacks were helped greatly with the inclusion of the experienced John Davis in goal, Cathal Hennelly, Aran McLoughlin in defence and Brian O’Connell, Paul Donnellan and captain Mark McCormack in attack.

Walterstown went in to this tussle like so many do in these early season competitions. They were without the likes of Ruairi O’Dowd and Sam McCabe in attack, while Alban Crosbie was also unavailable and in defence Eoin O’Mahony was ruled out due to injury.

Dunshaughlin, too, were without a whole host of young players due to their commitments with the Meath U20 panel but nonetheless they started extremely well. The home side has 1-2 on the board inside the opening 10 minutes, while they nabbed themselves a second goal in the 12th minute thanks to Eric Casserly.

It was only then that the Blacks awoke from slumber. Their opening point came from the boot of midfield man Barry O’Connell before young Farrell hit the onion sack for the first time. Conor Farrelly and Brian O’Connell were involved before the latter off-loaded to the 2021 Meath minor man and he stuck the ball in Jennings’ net to leave the score at 2-2 to 1-1 as the midway point of the opening half approached.

A superb point from distance followed from Adam Quinn as Walterstown narrowed the gap to just three in the 16th minute.

With 18 minutes played Walterstown hit the front for the first time and it was a lead they didn’t let go of thereafter. Barry O’Connell was instrumental as he offloaded possession to Farrell who duly finished to the net for his second goal and the Blacks led 2-3 to 2-2.

That lead was stretched to four two minutes later when young Adam Quinn raised a green flag, while a point from Mark McCormack and another goal from Farrell saw the Blacks open up a double scores lead (4-4 to 2-2).

At the interval Walterstown held a 4-5 to 2-3 lead over Richie Kealy’s men and the Black blistering second quarter showing really left Dunshaughlin with a mountain to climb.

The home side did peg two back after the re-start but Walterstown always kept the scoreboard ticking over.

When Adam Quinn grabbed his second goal of the encounter after 48 minutes, it really was a case of lights out for Dunshaughlin. Brian O’Connell picked out Quinn who volleyed to the net to leave Walterstown with a 5-6 to 2-6 advantage.

The O’Connell brother, first Barry and then Brian, split the posts to extend the Blacks’ lead further before Dunshaughlin stemmed the tide but the writing was on the wall at that stage. Two late point from the home sides made little difference and it was Walterstown who comfortably took the spoils on opening night.

Up next for the Blacks is a meeting with Caoimhín King’s Longwood next weekend.