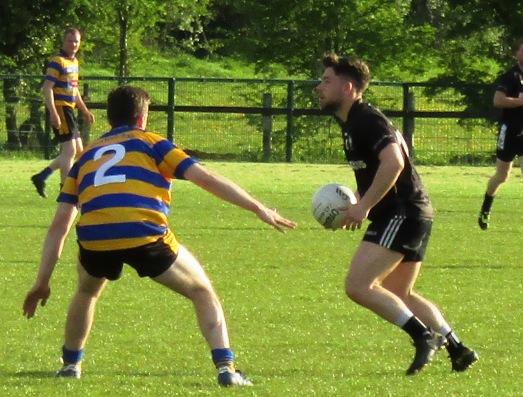 Walterstown travelled to sunny Kilcloon on Saturday evening, to take on Black Hall Gaels in this 7th Round Div 2 encounter. Walterstown with only one win in the league so far were hoping for a good performance here and the much needed 2 League points. This was indeed an entertaining, high scoring game.  Walterstown got off to a good start and when Robbie McDonnell put Cormac Madden through for a well taken goal after 7 minutes, it put them into a 3point lead.  By half-time the Blacks were 1-9 to 0-6 ahead.

In the second half though Walterstown had the first point from Cormac Madden after 3 minutes, Black Hall scored a goal almost immediately to put 4 points between the teams. Conor O Sullivan caught the resultant kick out and found Robbie McDonnell who finished neatly to the net. Walterstown were now 7 points ahead again. However in what was a dramatic second half, Black Hall scored another goal 10 minutes into the half to narrow the gap to 2-11 to 2-07. Then in the 20th minute, Black Hall scored a goal direct from a free kick to put only 2 points between the teams.

Walterstown however were undaunted and thanks to some good shooting from play scored 5 more points, before Referee Hugo Whoriskey blew the final  whistle, eventually winning on a score line of 2-19 to 3-09

Walterstown’s full forward line of Robbie McDonnell, Brian O Connell and Cormac Madden were in top form and contributed 2-14 of Walterstown’s winning tally between them.  Manager Eoin Carroll must be pleased with how the whole team played and will now be looking forward to the next round.