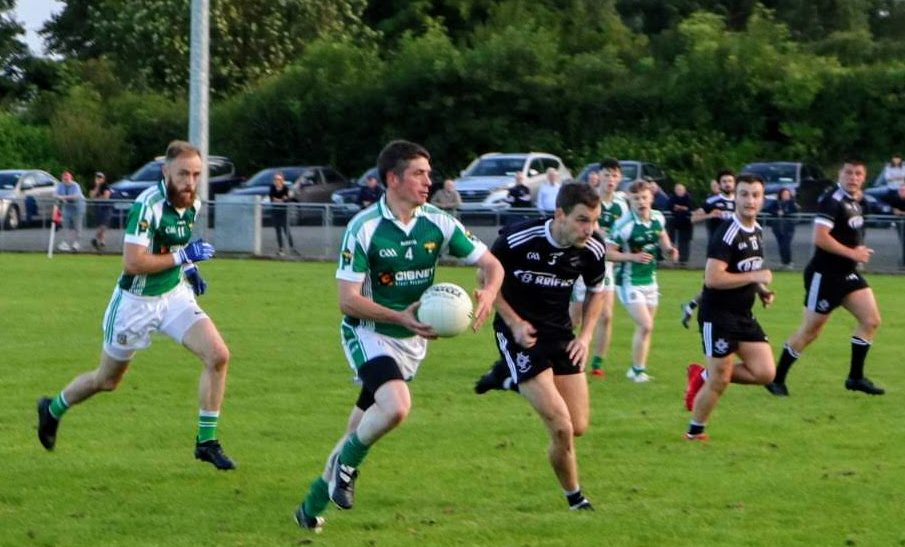 WALTERSTOWN scraped over the line in what was a tense and close opening round to group B of the Meade Potato Company Intermediate Football Championship in Carlanstown on Friday evening.

Going in to the game Martin O’Connell’s charges were favourites to take victory but they had it anything but all their own way on a sunny evening at St Michael’s. During the eight minutes of time added on at the end by referee Keith Sheerin, the team in green threw everything but the proverbial kitchen sink at the Blacks defence. Two attempts to hit the net went over the bar instead and Walterstown clung on for dear life to secure the two point victory.

Having been annihilated by Trim in the league the previous Wednesday, Walterstown welcomed back Cathal Hennelly and Conor Farrelly in defence, while captain Alban Crosbie also returned to the starting XV. Their attack was bolstered by the inclusion of Robbie Cunningham and Ruairi O’Dowd but it was the opposition who drew first blood on Friday.

Walterstown were hampered by the fact that full back Cathal Hennelly received a black card early on but luckily for the Blacks they found their rhythm, began to get on top and finished out the first half well. 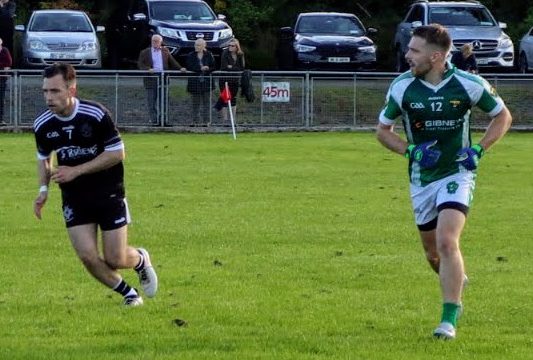 Walterstown’s Aron McLoughlin and Ciaran Burke from Moylagh in action in Carlanstown on Friday evening.

Stalwart Alban Crosbie opened their account when he sent over a free and in the 11th minute Sam McCabe rose to win Aengus Fanning’s kick out before he carried and split the posts to leave his side trailing (0-3 to 0-2) at the midway point of the first half.

Walterstown restored parity three minutes later when Crosbie rose highest and from the resulting mark he picked out Ruairi O’Dowd who fired over the bar.

Moylagh responded well however and nudged in front again by the 19th minute thanks to another converted free from O’Reilly. For the remainder of the half though, it was Walterstown who were on top.

A superb pass from Davy Donnellan picked out full forward Brian O’Connell and he offloaded to his brother Barry who struck over to level proceedings (0-4 to 0-4) with ten minutes of the half left to play. Sam McCabe doubled his tally when he raised a white flag after collecting possession from wing back Aron McLoughlin and for the first time in the game the Blacks found themselves in front. 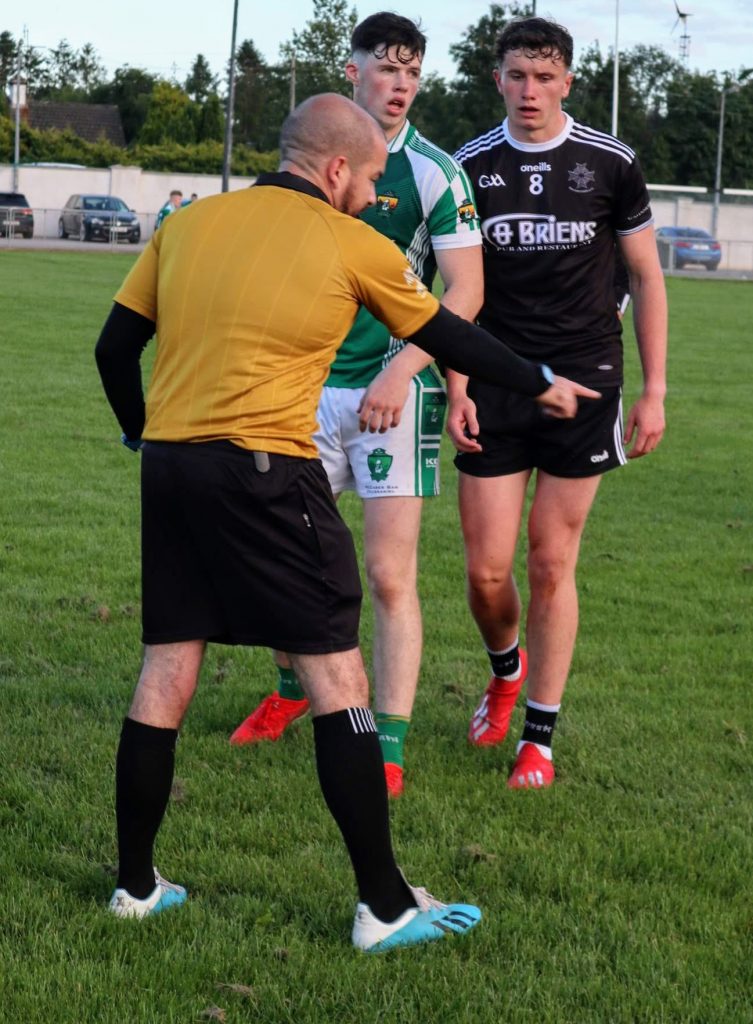 Walterstown’s Barry O’Connell gets ready to contest a throw ball.

Despite losing Conor Farrelly to a thigh injury, Walterstown remained strong in the run up to the break. Alban Crosbie sent two frees and Farrelly’s replacement Mark McCormack also split the posts. However, Moylagh did add to their tally before the interlude when Tomas O’Reilly bagged a point from play to leave the scoreboard ready 0-8 to 0-5 at the break.

Just 30 seconds after the turnaround an absolute beaut of a point from Ruairi O’Dowd saw Walterstown stretch their lead to four but it was quickly cancelled out by a point from Joe Melia to leave the score at 0-9 to 0-5.

Moylagh were soon back on level terms though when full back Darren Gibney hit the back of the net. In a sweeping move Gibney picked out Tomas O’Reilly with a pass and he offloaded to Sean Reilly. Gibney continued his run and collected the pass from Reilly before striking past John Davis in the Walterstown goal to leave the score at 0-9 to 1-6 after 34 minutes.

Three on the trot for the Blacks, courtesy of Crosbie (two frees) and O’Dowd left them leading 0-12 to 1-6 at the midway point of the second half.

Walterstown were guilty of some poor shooting and errors in the minutes that followed however and were punished when when O’Reilly sent over a free to reduce the deficit to just two by the 49th minute but Crosbie did manage to settle the nerves with a converted free with five minutes of normal time left on the clock.

Cathal Hennelly received a red card in the 57th minute and Moylagh took that as their opportunity to really put the pressure on the Walterstown rearguard. O’Reilly sent over another free to reduced the deficit to two but Davy Donnellan cancelled it out with a point down the other end. 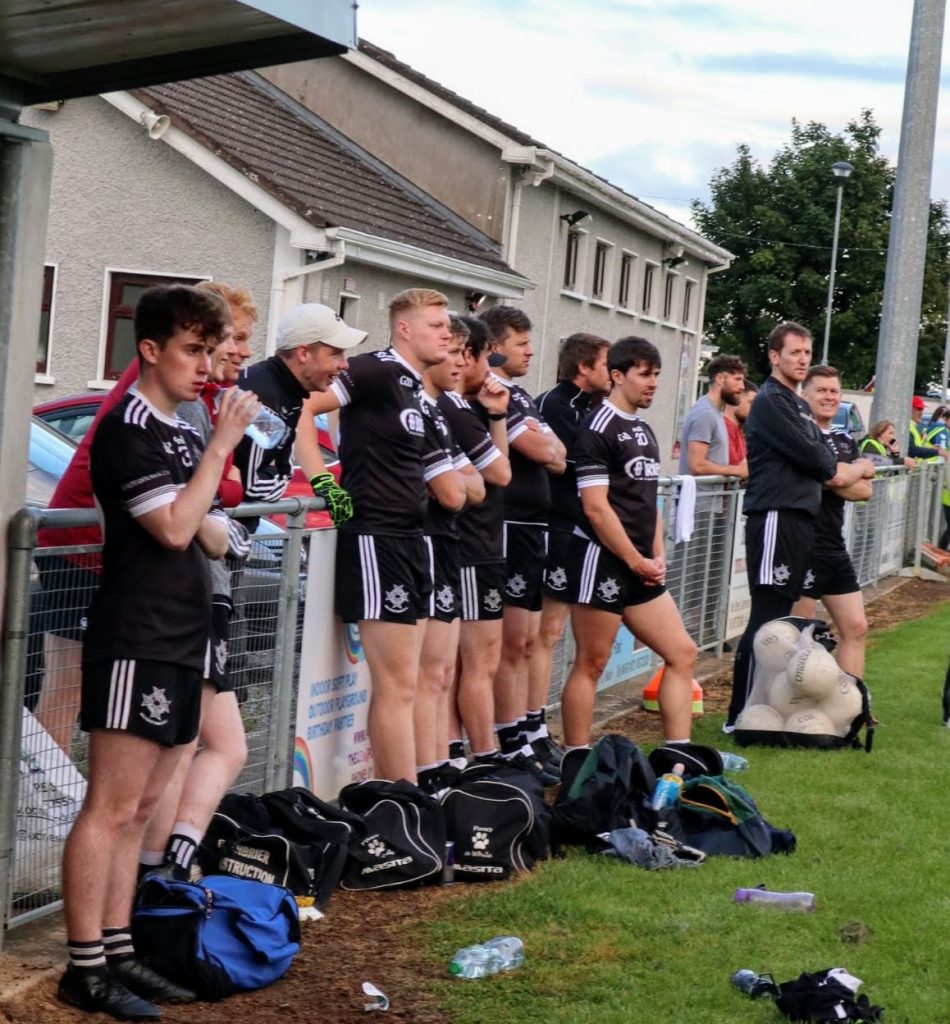 Walterstown’s subs watch on from the sideline.

Adam Treanor saw his shot on goal superbly saved by Angus Fanning and the insurance point came from the boot of Brian O’Connell in the third minute of stoppage time.

Moylagh were persistent however, and by God they did they try hard for a goal during the closing stages. But they had to be content with two points in the end as Walterstown clung on for the two point victory.

Up next for the Blacks is a second round meeting with St Patrick’s in Duleek on August 14, while Moylagh take on St Michael’s in Carnaross.