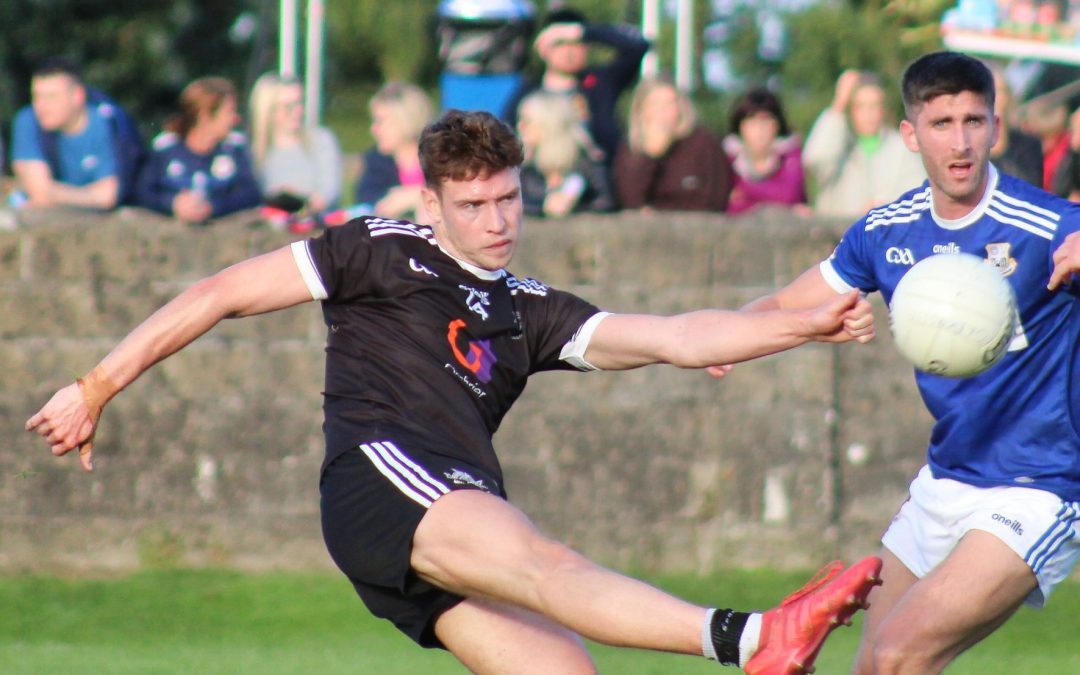 A cracking all round performance saw Walterstown open their Intermediate Football Championship Group A campaign with victory over a fancied Oldcastle side in Kells on Saturday.

The Blacks gave a dominant display during the opening period, conceded three goals after the break but showed serious resolve to twice come back from a two point deficit in the final half to take a deserved win and ensure a great start to championship 2022.

Walterstown were dealt a late blow with the news the ‘keeper John Davis failed a last minute fitness test but Mark Foy stepped in to the posts and put in a superb shift. In defence Ciaran Cox and Lorcan O’Connor, both just a year out of minor football, made their championship debut and did so with finesse. In the middle of the field Adam Quinn also made his first championship start and his trusted left peg proved invaluable and indeed delivered three points for the Blacks. David Reynolds started at centre back, his first championship start in three years due to injury and his experience proved invaluable. Of course the Blacks were also without Barry O’Connell in the middle of the park who is on the mend from a wrist injury but this first round encounter came just too soon for him.

Walterstown didn’t enjoy much success in Division 1B of the A League and indeed suffered relegation. Saturday’s opponents came to Walterstown and walked away with a 23 point victory but we all know that championship is a different sort of animal altogether!

Neil Reynolds’ side enjoyed a super start to this encounter in Páirc Colmcille and led 0-4 to no score after just six minutes. Adam Treanor split the posts with a minute on the clock, while Brian O’Connell sent over a free soon after. O’Connell was on the end of pass from Ciaran Cox, was then impeded and popped the resultant free over the cross bar from out of his hands.

Young Lorcan O’Connor made it 0-3 to 0-0 in the fourth minute when he ventured forward and raised a white flag before a belter of a point from out the field from Paul Donnellan.

It wasn’t until the 13th minute until Oldcastle, under the guidance of Jude McNabb, opened their account through midfield man Colin Hawdon. Just before that though Walterstown should have had the ball in the back of the Oldcastle net but Ruairi O’Dowd’s effort rebounded off the crossbar and Oldcastle were temporarily spared.

Adam Quinn, a product of Walterstown’s 2021 Development Squad, grabbed Walterstown’s fifth point of the evening when he struck over from out left, while at the other end Conor Delaney responded with a point for the team in blue and white. That was to be Oldcastle’s last point of the opening half but the Blacks didn’t have the same difficulties.

When Mark McCormack was tackled unfairly after 21 minutes Brian O’Connell stepped forward and popped over the free kick, while Quinn also converted a free with four minutes of normal time remaining. Before the break Mark McCormack converted a mark and O’Connell a free to leave the scoreboard reading 0-9 to 0-2 as the teams headed down the steps to the dressing rooms.

Frustrated by their first half showing, Olcastle came out hell for proverbial leather in the second. With just three minutes played Jude McNabb’s side had seven point deficit down to just three. They won a penalty just a minute in when Walterstown captain Cathal Hennelly hauled down Jason Scully and Dunshaughlin official Andrew Smith signalled for the spot kick. It was dispatched to the net by Pearse Sheridan and Scully himself slotted one over soon after to leave the score at 0-9 to 1-3. And three was soon turned to level pegging! This time Scully himself hit the onion sack and Walterstown’s seven point advantage was gone with just four minutes of the second half played.

It was the Blacks’ response that was must impressive however. They went down the other end and kicked the next three points on the trot. Brian O’Connell converted a free after O’Dowd was fouled; a common occurrence throughout the evening, while the two combined again soon after with O’Dowd this time splitting the posts. The pair’s wee purple patch didn’t end there either because soon after O’Dowd once again provided possession for O’Connell and he struck over with was his one and only point from play on the night. O’Dowd had been moved from full forward out to the middle of the park and it really proved to be a masterstroke by the Walterstown line.

However, it most certainly wasn’t all plain sailing for Reynolds’ men because back Oldcastle came. They nabbed a third goal soon after, through Colin Hawdon to restore parity once more.

With 41 minutes on the clock Oldcastle hit the front for the very first time thanks to a point from the boot of Scully. That lead was doubled when CJ Healy converted a free but Walterstown, once again, responded brilliantly.

O’Dowd fired over a cracker from distance to reduce the deficit. From the kick-out Paul Donnellan won possession before laying it off to O’Dowd and he, once again, raised a while flag and the sides were level again with nine minute remaining.

As the clock ticked on it was absolute neck and neck. Oldcastle were back on level terms by the 54th minute of play but yet again the Blacks, who worked immensely hard for each other, found a way.

In the end it was two converted frees from the boot of Brian O’Connell and Adam Quinn that proved to be the decisive scores.  The first of those came in the 56th minute when O’Connell was impeded himself, while the other came two minutes in to time added on. On this occasion O’Dowd was on the end of a misjudged Oldcastle tackle and up stepped youngster Adam Quinn, cool as you like, and kicked it over the bar.

In the time that remained Oldcastle, with no other choice, searched for a goal but it proved to be elusive and the Blacks held on to draw opening round blood after a a genuinely fantastic team showing.

Up next for Neil Reynolds’ charges is a meeting with St Michael’s in round two on August 20, a game that will also take place in Kells.