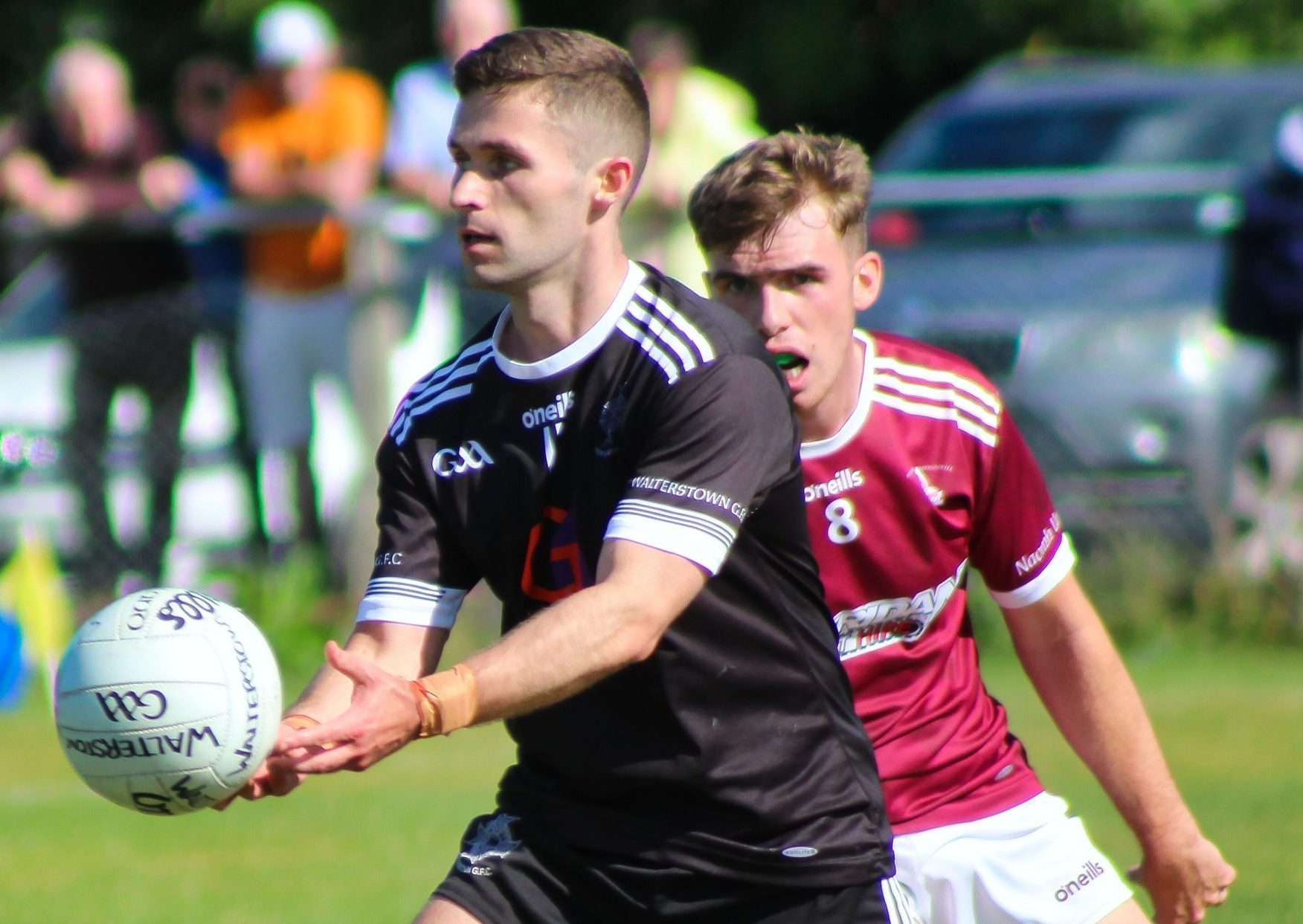 The Blacks are through! And it’s by virtue of score difference for Neil Reynolds’ side after they secured a 17 point victory over St Vincent’s in Ratoath on Sunday afternoon. It’s them and Oldcastle who advance from Group A after the latter secured victory over St Michael’s in the other group game, while St Vincent’s go on to do battle to save their intermediate status just a year after coming up from the junior ranks.

Despite this encounter being a toe-to-toe one during the early exchanges, Walterstown were more than full value for the victory. They had way too much firepower for the Ardcath side, led by seven at the break and outscored their opponents 3-5 to 0-4 during the final 30 minutes plus. With all eyes on the other group game in Kells, and when the news filtered through that Oldcastle had won by four, the Blacks basked in relief as they made it through and lived to fight another day.

Walterstown made three changes to the side that lost out to St Michael’s in round two. In defence Breandan McGuinness made his first ever championship start when he replaced Eoghan O’Mahony at corner back, while David Reynolds came in at centre back. Conor Farrelly moved from centre field in to the half back line, while David Donnellan replaced Aran McLoughlin in attack.

Walterstown performed well all over the park but it was Lorcan O’Connor, wearing the number five jersey, that gave a man-of-the-match performance. Indeed, it was an almost flawless showing from the young dual star and, just a year out of minor football and he is really turning heads at the intermediate grade this year. He has intelligence beyond his years on a football field and an engine that is second to none.

In attack Ruairí O’Dowd, once again, gave an exhibition, despite serious, and more often than not, unfair attention from the Vincent’s rearguard, while Brian O’Connell was also on song, finishing with a personal tally of 2-3.

Having completely blitzed a fancied Oldcastle side in the opening round, Walterstown fell to St Michael’s in round two after a well below par performance. The Blacks were fancied to come out on top ahead of last Sunday’s encounter, but as this Intermediate Championship has proved time-and-time again, there really are no such things as guaranteed results.

And early on it really was nip and tuck in Ratoath. St Vincent’s drew first blood when Nigel Hand converted a free in the second minute but parity was restored when Brian O’Connell did likewise down the other end after Conor Farrelly was impeded.

O’Connell made it two from two soon after. This time Paul Donnellan was fouled and the older of the two O’Connell brother kicked the resultant free out of his hands and sent in over to nudge his side in front early on.

At the midway point of the first half the sides were level with three points apiece but thereafter Walterstown took control. They hit the front with 18 minutes on the clock when Barry O’Connell was first to a St Vincent’s kick-out and he played the ball long to O’Dowd, who was subsequently fouled. Brian O’Connell stepped forward to take the free, duly struck over and Walterstown got their noses in front (0-4 to 0-3).

Thereafter Neil Reynolds’ charges never relinquished the lead. Indeed they kicked on, scored the next 1-3 without response and were in the proverbial driving seat. Ruairí O’Dowd opened his account with a super score in the 25th minute after a great pass from Davy Donnellan, while an impressive brace from midfield man Adam Quinn followed. Before the break the Blacks’ pounced for their first goal of the afternoon courtesy of Ruairí O’Dowd, which gave Walterstown a 1-7 to 0-3 cushion at the interlude.

The Johnstown/Walterstown outfit picked up where they left off after the turnaround and had the ball in the back of the Vincent’s net just four minutes in. A ball in from Adam Quinn picked out Brian O’Connell and he made no mistake in firing passed Graham Connor to give his side a 2-7 to 0-3 advantage.

To be very fair to St Vincent’s they really did endeavour to stem the tide and points from Nigel Hand (two frees), Martin Fox and John Broderick did that somewhat but Walterstown really had too much in attack for them to cope with.

Barry O’Connell raised a white flag in the 39th minute before Alan Wall got in for Blacks’ third Toal of the afternoon and by that point his side led 3-8 to 0-5.

With all eyes on the other group game happening in Kells, Walterstown were well aware of what was needed if they were to make it through to the knockout stages and boy did they well and truly go for it and got their just rewards in the end.

They finished in ruthless fashion to ensure they finished ahead of the Michael’s on score difference and advanced.

Substitute Aran McLoughlin collected possession from Mark McCormack before splitting the posts in the 54th minute, while Adam Quinn sent over a free after O’Dowd was, once again fouled. O’Dowd himself kicked the next score from out left and as the end of normal time approached, all eyes were on the Twitter update from Oldcastle and St Michael’s in Kells.

When the news filtered through that Oldcastle had prevailed by four, Walterstown were well aware of what was needed and delivered the goods.

O’Dowd split the posts in the last minute of normal time to give his side a 3-12 to 0-7 lead and then, deep in to time added on, Walterstown pulled one more goal out of the bag! It came from Brian O’Connell following a great ball in from substitute Adam Treanor. O’Connell was waiting at the far post, used all his physicality and rose highest to send the ball to the net and that was that; a 17 point victory for Neil Reynolds’ charges and a place in the quarter finals! Two wins from three but it was the score difference that saw them pip St Michael’s and advance.