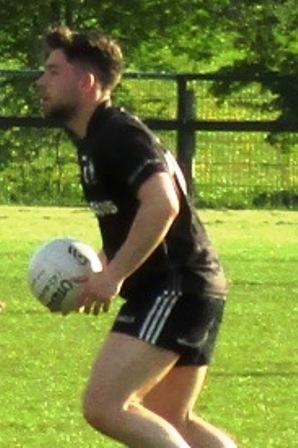 Walterstown hosted the unbeaten Division 2 A League leaders, Syddan, before a healthy crowd on a sunny evening.

Missing a number of regulars, the lads started brightly, with two points from Cormac Madden. Syddan responded with 1-4, before the home team regained control. From the 15th minute, the Blacks reeled off six unanswered points, from Cormac Madden (3), Ruairi O’Dowd, John Geoghegan and Kevin Devine, to take a one point lead. Syddan then scored the next four points, before Ruairi O’Dowd kicked the final score of the half, on the stroke of half-time.

The home team again started well, with points from Cormac Madden and Ruari O’Dowd, before Syddan scored a second goal, against the run of play. Walterstown soon cancelled out the goal, scoring the next three points, one from Brian McGrane and two from Cormac Madden. Two points in a minute from Syddan, at the midway point of the half, put the visitors back ahead. However, Walterstown struck back, kicking the next four points, from Cormac Madden (2), Aaron McLaughlin and Ruari O’Dowd and held a well earned one point lead going into injury time. A third goal for Syddan, with the assistance of the post, gave them a decisive two point lead, which was their reward for going for the net, rather than taking a point to level the game. Walterstown deserved at least a share of the points and had one further attack on the away goal, unfortunately without success.

Walterstowns Manager Eoin Carroll whilst disappointed with the result was delighted with the team performance and hard work the lads put in , and was very pleased  with the performance of the new additions to the team.

Thanks to Mark McGuire for the Match Report.