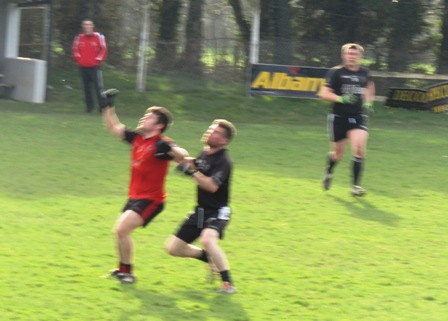 On a fine spring evening Walterstown faced Rathkenny in their first round of the Junior C Championship and were looking for a pick me up from the Intermediate result earlier in the week. Back in action for the Blacks, from long term injuries, were Christopher Farrelly in midfield and Neil Freeman at left half forward.

Rathkenny were first off the mark with a point in the first minute, but Walterstown struck back with points from Joey Coogan, Paul Donnellan and Colm Reilly. Walterstown were enjoying the better of the play and possession but were hauled back when Rathkenny hit the first goal of the game with a low hard shot in the bottom corner , giving Darragh Keegan no chance of stopping it, half way through the first half. Walterstown went on to score six points without reply, the highlight being a well taken point by Paddy Donnellan from wide out on the wing. 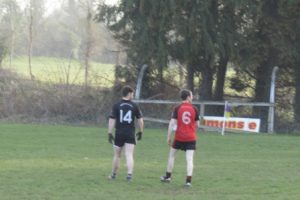 After the break saw Andrew Barry in for Paddy Donnellan, but if was the inform Joey Coogan who made the opening impression with two well taken points in the first two minutes. Again Walterstown were enjoying good possession, with Conor Lenehan making several decisive runs, Ciaran Murphy Peter Reynolds and Dan Halligan marshalling the defensive line well. Rathkenny still posed a threat though, and came close to scoring a second but were thwarted by an alert Cormac Freeman who defended the line well. Paul Donnellan almost scored a first goal, who forced a great save from the Rathkenny keeper, but Paul did get his goal on 20 minutes to send Walterstown 10 points clear. Walterstown made more changes with Andrew McMahon, Michael Deane, Kit Reynolds and Jason Finlay coming on and in the final ten minutes racked up a goal (Andrew Barry) and six more points.

A good performance from the boys, scoring 2:17 from play, from 10 different players.