Blacks in charge in championship opener 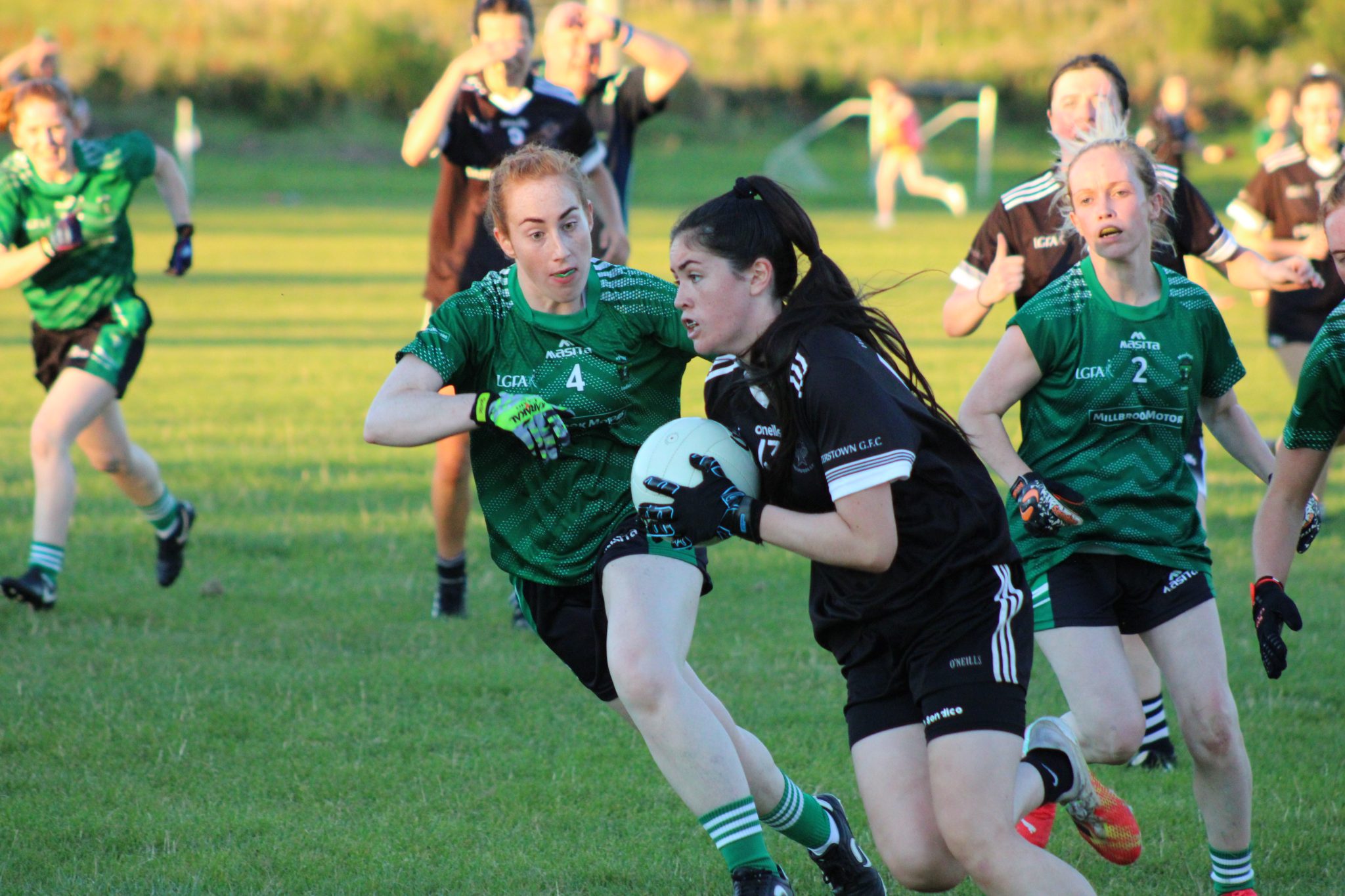 Not one. Not two. Not three. Not four. Not five but six goals from the unstoppable Katie McCarn helped the Walterstown ladies get their Junior A Championship Group A campaign off to an emphatic start in Moylagh on Wednesday evening.

Kepak Junior A Football Championship Group A Round 1

Some 28 points separated the sides at the long whistle in what was as mis-matched an encounter one is ever likely to see. Walterstown’s absolutely blistering start saw them open up a 18 point advantage by the end of the first quarter. And while Moylagh certainly improved thereafter, they simply were no match for the rampant girls in black!

Walterstown went in to this game without the services of the influential Julie Donnellan, who recently went travelling, while Sarah-Jane Lyons and Niamh McGuinness were also notable absentees. Nonetheless, Joey Farrelly’s side were fancied to come out on top ahead of the game and they certainly didn’t disappoint.

With less than two minutes on the clock Walterstown stuck the ball in the back of Moylagh net when full forward Lisa O’Neill collected possession from McCarn before striking to raise the green flag. A minute later O’Neill converted her first free of the evening and Walterstown led 1-1 to 0-0.

McCarn then won and coverted her first of two penalties on the night to stretch Walterstown’s lead to seven after only five minutes of play.

The home side failed to score for 20 minutes of the first half and by the time they did register their first score Walterstown had 5-3 on the board. Former Meath U16 star Lucy Reynolds hit the onion sack in the eighth minute and soon after McCarn bagged herself another. Her rasping shot rifled to the top of the net in the 10th minute and at that stage the Blacks’ had a commanding 4-1 to 0-0 advantage.

Farrelly’s side were ruthless during the opening quarter and before the water break had time to hit a further 1-2 without any reply from the hosts. Lisa O’Neill was the provider for McCarn and she, once again, put the ball passed the keeper before O’Neill herself sent over a free after Helen Lenehan was adjudged to have been impeded. And before the break for water Reynolds once again split the post to leave her side some 18 points in front.

Moylagh probably enjoyed their brightest spell in the second quarter and grabbed themselves a goal, through Cliona O’Reilly, on the 20 minute mark, while Suzie Mullally registered their first point as the half came to a close.

It was soon cancelled out by the visitors however. From the kick out following Mullally’s point, Sarah Hussey gathered possession before offloading to Reynolds and she made no mistake with her attempt to split the posts. In time added on the Blacks nabbed another point when Isabel O’Connor won a hop ball, played possession off to Lisa O’Neill and she picked out Hussey, who offloaded to McCarn. The final piece of the jigsaw was completed when McCarn’s hand pass located Lucy Reynolds and the latter struck over to leave the half time score at 5-5 to 1-1.

The second half saw Walterstown come with much of the same. Three points on the trot from Lisa O’Neill, two from frees, in the third quarter ensured cruise control was the order of the evening.

The Blacks were positively merciless for the duration and racked up another 4-1 in the final quarter. In the 47th minute McCarn bagged her fifth of the evening and a minute later dual star Isabel O’Connor rifled a shot to the back of Sarah McDermott’s net. With four of normal time remaining Lisa O’Neill sent a free over the bar before McCarn got on the end of a super long ball in from captain Mollie Browne and, yet again, you guessed it, hit the back of the net!

And if that wasn’t enough she had time for one more! Deep in to time added on she was once again hauled down and the Blacks were awarded a penalty. Up stepped McCarn and she dispatched with aplomb to round off an amazing championship opening night for Walterstown!

Up next for the Blacks is a home meeting with Duleek-Bellewstown on Wednesday, August 24.