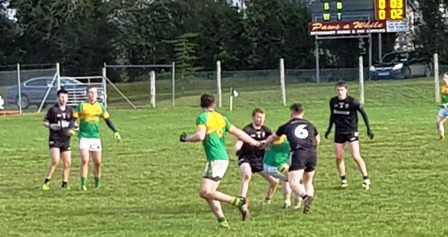 This was the first home game for Walterstown in the 2018 season, and after the opening defeat against Duleek Bellwestown, manager Eoin Carroll was looking for an improved performance from his charges. This time Ballinabrackey were the opponents on a crisp February Sunday morning.

Walterstown made three changes to the startling line up, with John Goeghegan starting in defence and David Reynolds moving into centre midfield and Joey Coogan starting upfront. First blood was to Ballinabrackey with a point. Walterstown’s Aaron McLoughlin slotted a brace of points from play. It was a first half never really got going, and Ballinabrackey went in at the break with a slender one point lead.

After the break Ballinabrackey started to build on their lead, again with the first score of the second half and they seemed destined to run away with the game after a well taken goal to increase their lead. Second half changes saw the introduction of Barry O Connell, Robbie McDonnell, and Kashif Ali. Barry unfortunately picked up an injury and was replaced by Conor O Sullivan. Walterstown did put up a fight to Ballinabrackey, 2 frees from the boot of Robbie McDonnell, a well taken Alan Wall point, and a Brian O Connell free reduced Ballinabrackey’s lead to 3 points with five minutes remaining. Cathal McGuinness and Eoin O’Mahony came on but Ballinabrackey pushed out the lead again to four points and held on for the win.

An improved performance for the blacks but next up a tough away fixture to Nobber, who had a fine win over Michaels the previous day.