Two from two for Blacks in Division 8 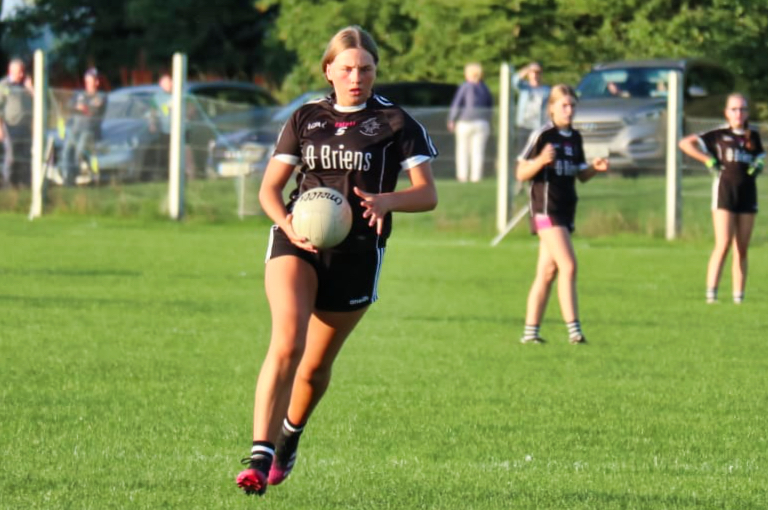 Having accounted for St Michael’s in the opening round, Walterstown made it two out of two in the Meath LGFA Football League Division 8 on Friday evening last. This time out they got the better of visitors Duleek-Bellewstown thanks, in no small part, to a superb second half showing. The Blacks now share top spot in the table with Gaeil Colmcille.

In the middle of the field young Helen Lenehan put in a great shift for the Blacks, while beside her Lauren Smith was also in top form.

In defence Abigail Stewart brought her a-game, while Mia McGovern and Lauren Genocchi gave the Duleek defenders plenty of food for thought.

It was the home side that struck first blood when Abbie Farrelly split the posts early on, while down the other end the Blacks’ rearguard was in flying form. Leanne O’Neill, on more than one occasion, came to her side’s rescue with some super blocks. However, with 14 minutes on the clock the visitors finally opened their account, raised a white flag and restored parity.

A minute later Duleek had the ball in the back of the net and opened up a three point advantage. Indeed, the visitors enjoyed quite the purple patch in the second quarter of the opening half but Walterstown weathered the storm well.

As the first half came to a close Rebecca Roche and Abbie Farrelly stemmed the tide when they grabbed a point apiece to leave the scoreboard reading 1-6 to 0-3 at the break.

After the turnaround the Blacks sprung in to life. Two goals courtesy of Abbie Farrelly and Sarah Heffernan brought the game back level and thereafter the Walterstown girls were on song and were full value for the two point victory.

Interestingly Walterstown lined out with four sets of sisters involved; The O’Neill sisters, Leanne, Rosanne and Martina, the Farrelly sisters, Abbie and Ella, the Deegan sisters Emma and Grace and the Kelly sisters, Aisling and Emma, who all played pivotal roles. Meanwhile substitutes Niamh McGuinness, Eimear Farrelly, Antonia Brady and Isobel O’Connor made a huge impact by scoring much needed points, especially when Duleek grabbed a goal from a penalty to bring the sides very close near the death.

However, ‘keeper Meabh McCarrick made some great saves as usual, and along with the aforementioned goal from the penalty, Duleek only managed to score two more points in the second period.

Up next for the Blacks is a home meeting with fellow table toppers Gaeil Colmcille.