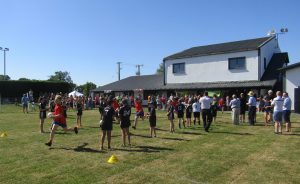 Well Féile has just finished up but what a weekend it was. On Thursday evening at 8:30 Chairman Stan Cooney gave the Féile opening address and Mary McCabe hoisted he tricolour to signify the start of Féile 2018. Prior to Thursday members of the club carried out trojan work to get the clubhouse and grounds in tip top shape for our visitors. The clubhouse was painted from top to toe and Paddy McCabe demonstrated his artistic flair by painting the Walterstown logo on the side wall.

On Friday from 3:30 on Féile things really got into full swing, as the Coaches and teams started to arrive for the evening games. Ardboe O Donovan Rossa, St Patricks Stamullen, Claregalway , Skryne , and our guests for the weekend, Clann Eireann and Southern Gaels all arrived to inject Walterstown with a transfusion of fantastic noise and colour as the mercury nudged towards the 30 degree mark.

Jane O Connell was on hand to introduce the visiting teams and Gabrielle McGuire sang the national anthem.  Mick O Brien was on hand to throw in the ball for the opening game at 5pm between Walterstown and Ardboe O Donovan Rossa.

Ardboe were a very accomplished team and overcame Walterstown, whilst on the back pitch saw St Patricks play Clann Eireann, with again the Northern side claiming victory. Next up on the main pitch was local side Skryne who faced our guests Southern Girls in the first of the girls’ ties.  Southern Gaels with links to Mick O Dwyer, and who’s niece current plays in the team  overcame Skryne while on the back pitch Walterstown faced up to Claregalway , with once again the visitors claiming the spoils.

The second round of the Boys games saw Walterstown boys play Saint Pats and loose out by a point to the visitors. The concurrent game, (probably the game of the day) saw Ardboe record their second victory in a very entertaining game with Clann Eireann. The final round of games on Friday saw the Walterstown Girls record a win over local rivals Skryne and Southern Gaels recorded a one point win over Claregalway. 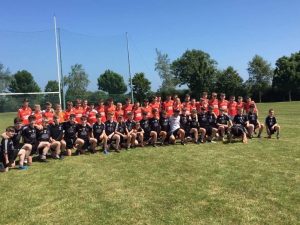 The visiting teams then headed off whilst our guests for the weekend where introduced to their host families and headed off to get some much deserved rest before their next games on Saturday. Later in the evening the clubhouse was still busy as several parents of our guests returned to the clubhouse for a bit of craic, socialising and a spot of memento taking as one visitor was particularly keen on acquiring the John West Feile coordinator shirt, and succeeded in doing so!.

Saturday rolled in with a welcome breeze to cool the air but it was still very warm as Walterstown boys took to the field to face our guests Clann Eireann. Again this was a great game and again the Walterstown boys were to lose another game by a single point. This game was followed Walterstown and Southern Gaels, with again the visitors emerging victorious. This was the final game in the club house as all the teams headed off to St Feckins (Boys) to face Crossmaglen Rangers and to Pairc Tailteann (Girls) for the next round of quarterfinals against Navan O’ Mahonys. The Walterstown Boys and Girls both qualified for the semi finals with wins as did Southern Gaels, and Clann Eireann were unlucky to lose their tie by a single point.

It was then back to O’Briens for a spot of food before the teams meet up with other teams from Skryne and Senechalstown for the now famous Walterstown Disco. It was to be a relatively early night though as most of the clubs were hitting the road again in the morning with a visit up north to compete in the semi finals.

An early start on Sunday as the boys and girls both travelled north, where the boys took on Ferbane/Belmont in their Semi Final. Despite a great start and a half time lead the lads lost out by 2 points.

The girls meanwhile headed for Burren in Down for face Saval in the semi final. The girls clinched the win with a 2:4 to 1:2 scoreline for set up a Shield Final with Seneschalstown which they won by a sore of 1:08 to 1:02.  Scorers for the girls included Sarah Jane Lyons 0:06, Eimear Farrelly 1:00, Elsa Mullen 0:01 and Katie McCarn 0:01.

Scenes of joy and celebration followed as the girls were crowned Div 1 Féile Shield Winners 2018. 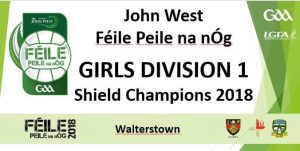 Well done to all our 48 players and 8 coach’s who represented their club magnificently over the three day event.

Special congratulations to Division 8 Cup Winners: Hertfordshire GFC / Cambridge GAA (who the boys visited last year and who looked after us so well) 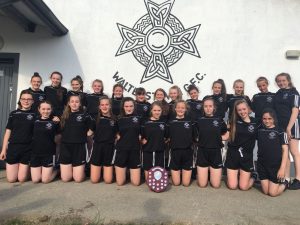 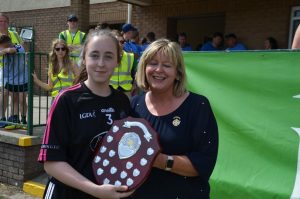 Check put this week’s Meath Chronicle and next week’s Chronicle for more features on Féile 2018.