Play it again Sam,,, brace helps Walterstown progress to round 3 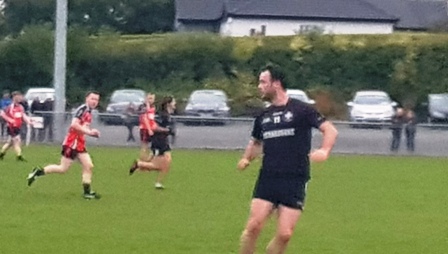 The last time Walterstown visited Carlanstown , in the league, was the evening the blacks were relegated to Division 3, and the early signs were not good, with the Walterstown squad severely depleted.

St Michaels were first to register a score, with three points in the first ten minutes and their superiority in the opening minutes was reflected on the score board. Walterstown had to wait for thirteen minutes before scoring their first point via the boot of Brian O Connell.  Less than a minute later Walterstown forward Joe Geoghegan had to go off after suffering a heavy blow to the face and was replaced by Sam McCabe.  Walterstowns Stephen Davis pitched in with two points, (one a free) and despite St Michael’s early domination they were not stretching their lead.  Sam McCabe made a surging run into the Michael’s area on 20 minutes, and laid of the ball to the on rushing Conor Cullen, who returned the ball to Sam, and he coolly slotted the ball into the net. Michaels scored another two points before Conor Lenehan, on a surging run from defence forced a good save from Michaels keeper. Sam McCabe pointed again just before the break and Micheals went into the break one point up.

After the break Walterstown continued to improve and Barry O Connell scored a fine point to tie the sides. Then that man again, Sam McCabe rifled the ball into the net for his and Walterstowns second goal shortly afterwards. Walterstown were now playing with a bit of style and Stephen Davis and David McGuire scored good points from play. The O Connell brothers were linking up well, with Barry supplying Brian for a fine point.  Mark McCormack also pointed with a fine point and was joined on the score board by Alban Crosbie and Joey Coogan. Walterstown were well on top now, and had an eight point lead going into the final few minutes of the match, Michaels needed goals but Ciaran Murphy was unfased between the posts and was backed up with some great defending from Davy Reynolds and Cathal McGuinness. Michael’s did grab two more points but these were cancelled out by points from Brian O Connell and Conor Lenehan.

Eoin Carroll and the Walterstown management team will have been absolutely delighted with the performance of the team, who gave it their all and hit their stride after a ropey opening, and with nine different players registering scores. Also a mention for  Joe Geoghegan who answered the call, with blood, and a few stitches. Onwards to round three!