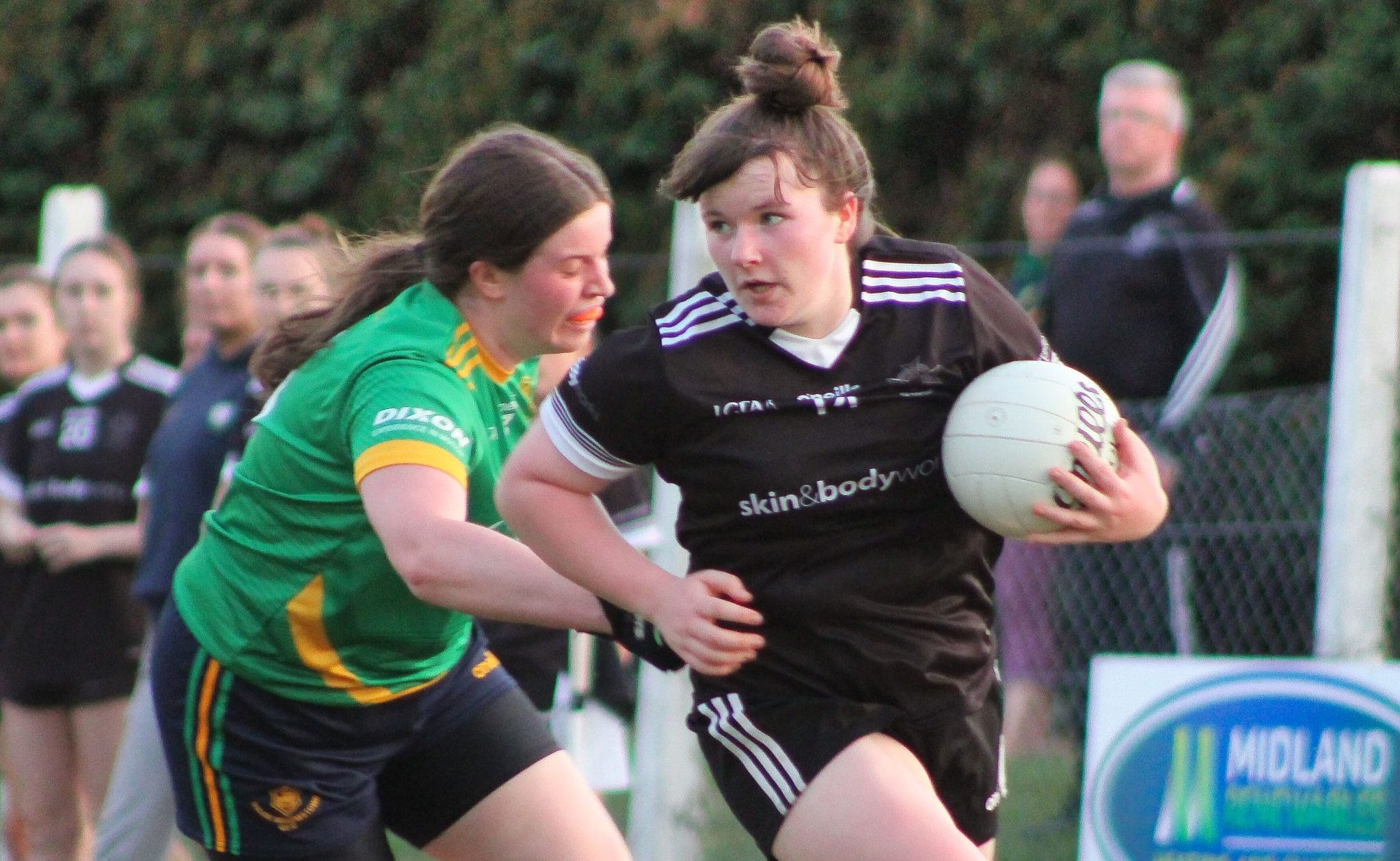 Ruthless. Unrelenting. Unyielding. Three words that sum up Walterstown’s performance in the second round of the Kepak Junior A Football Championship on Wednesday night. Throw in classy and impressive and one has all the superlatives needed to describe the Blacks’ showing against visitors Duleek-Bellewstown.

In what was an extremely tough night for the visitors, Walterstown went to the proverbial town, kept their opponents scoreless for 60 minutes and picked up their second massive win of championship ’22.

Having comfortably accounted for Moylagh in the opening round, Walterstown welcomed back Sarah-Jane Lyons in attack and what an addition she proved to be. The former Meath U16 star shot 2-2 and also set up a serious amount of scores. In defence Kate McCarthy moved to full back in the absence of Sophia Gillooley, while Niamh McGuinness also returned to the starting XV.  Zoe Harte moved from the defence in to the half forward line and Ella Farrelly came in in the middle of the field.

In the opening round against Moylagh Irish international Katie McCarn pounced for six goals and on Wednesday night she was on song yet again, putting four goals past Meath ‘keeper Monica McGuirk, while also raising the white flag on four occasions. Full forward Lisa O’Neill chipped in with five and her score in the 23rd minute of play was a particularly delightful one.

Defensively Joey Farrelly’s side had little or nothing to do but nonetheless, and when called upon, the backs didn’t set a foot wrong. Indeed Niamh McGuinness bagged herself 1-1 from wing back and captain Mollie Browne also got in on the scoring act. In all, it was an utterly serious performance from the girls in Black, who face the unbeaten St Ultan’s in the final group game in a straight shoot out to see who tops group one and waltzes off to the semi finals.

The first of Walterstown’s eight goals came after six minutes when Sarah-Jane Lyons shook the net. Lyons finished after McGuirk initially saved a Katie McCarn effort but there was little she could do as Lyons pounced on the rebound.

McGuirk really did stem the tide for her side on more than one occasion but such was Walterstown’s firepower, her great efforts only stemmed that tide a small bit.

By the midway point of the first half Walterstown led 1-4 to 0-0 and despite there only being five scores in it, the writing was firmly on the wall.

Before the interlude McCarn, O’Neill (three), O’Connor and Lucy Reynolds all struck over before McCarn finally opened her goal account. She was on the end of a flowing move from the Blacks and it’s rare she misses. The move began with Lucy Reynolds who played the ball in for Lisa O’Neill. She offloaded to Lyons, who spotted McCarn in the better position, popped over the pass and McCarn finished with all her usual poise.

At the interval Walterstown had a commanding 2-11 to 0-0 lead and for Duleek-Bellewstown it was just a case of attempting to curb the Blacks’ enthusiasm.

However, Walterstown amassed even more after the turnaround and added further to the visitors woes. Lucy Reynolds set up Lyons for her second goal of the evening just three minutes in and there after the goals kept on a rolling in.

With six minutes of the half gone Niamh McGuinness collected possession from Lyons before finishing to an empty net and there after Isabel O’Connor, McCarn and Reynolds tagged on points and Walterstown led 4-16 with 17 minutes remaining.

In the minutes that remained McCarn nabbed herself three more goal and it was her three pointer in 44th minute that was the sweetest of them all. Lucy Reynolds also finished to the net, while Mollie Browne and substitute Jennifer Lynch also got their names on the scoresheet.

In all, this second round fixture was a mis-match of epic proportions and, no doubt, St Ultan’s, who are also unbeaten, will provide a much sterner test for Joey Farrelly’s side in two weeks time.