A short trip on a fine May evening saw Walterstown visit their neighbours Seneschalstown in the League. Walterstown saw two changes to the starting line up, with David McGuire and Brian McGrane returning to the back lines.

The first half was a closely contested affair, with both teams exchanging points at either end. Cormac Madden, Brian O’ Connell, Ruari O’Dowd and Robbie McDonnell all registered points for the blacks. Seneschalstown ensured they would go in at half time in the lead when they scored their first goal on 29 minutes to give them a four point lead. Alban Crosbie reduced that to three points, but Walterstown also suffered an injury to Peter Reynolds who was replaced by Cathal McGuinness just before the break. 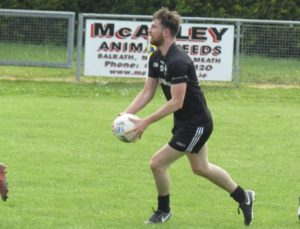 A half time Substitution by Walterstown saw John Moran replace Conor Cullen due to injury and a slight reshuffle in player’s positions. Six minutes into the second half Seneschalstown were awarded a penalty which was duly converted, and when they scored their third goal 6 minutes after that it looked that that would be that. But Alban Crosbie and Robbie McDonnell kept tipping over the points to reduce the lead. 20 minutes into the second half saw Robbie McDonnell, after beating several Seneschalstown players, score Walterstowns first goal, from a tight angle, to narrow the gap to six points. Walterstown now set of to reduce the lead even more. Just as full time loomed a point from Alban Crosbie had reduced the gap to 1 point. However Senechalstown won the kick out, advanced downfield and stuck the ball over the bar, and Martin Ennis blew the full time whistle.

A closely contested game between two neighbouring teams, and the final result could have gone either way, Walterstown battled back well to ensure an exciting finish.