Senior Team through to next round of the Boyne Cup 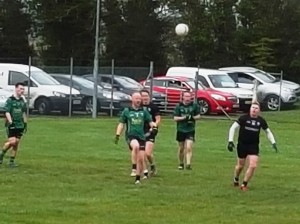 On a damp Sunday afternoon Walterstown took to the field hoping to put last week’s defeat behind them.

After a slow start Ultans were the first to register a score, converting a point in the eight minute, but luckily that was to be their last for a long period of the first half. Aaron McLaughin responded for Walterstown and then Ruari O Dowd found the back of the net after some good approach play from Brian O Connell. More points from David Donnellan and Johnny Geoghegan followed before Paul Donnellan added Walterstowns second goal . Walterstown continued to build on their lead with points for Brian O Connell and another for Johnny Geoghegan. In the final few minutes of the first half Ultans hit back with a goal and two points to reduce the 10 point lead Walterstown had built up.

After the break Utlans were to further erode Walterstowns lead, reducing the margin to 5 points. Once again some good work from Brian O Connell allowed Ruari O Dowd to register his second goal of the day. Johnny Geoghegan then registered his third point of the day before Paul Donnellan made way for Tom Walsh. Tom recently back after several years out, had an immediate impact, registering a point in less than a minute after his introduction, and shortly after released a good ball to Brian O Connell who scored another point for Walterstown. Another point from Johnny Geoghegan saw Walterstown once again restore their ten point lead, but once again back came Utlans , a goal and three points saw them once again begin to real in Walterstown who where once again. A converted free from Alban Crosbie took some of the pressure off, but another goal from Ultans lead for a nervous final few minutes in ever worsening weather conditions.