U12 Boys supporting the Meath Minors 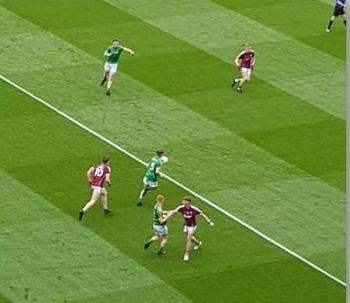 The day began in Walterstown as the team arrived, kitted out in their county colours in preparation of taking on the Tribesmen fans at this important match. The level of excitement and comradely was great to see from this bunch of lads, who have bonded as a team over the year. Being Semi-finalists themselves in two leagues during 2018, they know the importance of great supporters in willing a team to go all the way. As the lads boarded the bus, they received a snack bag kindly donated by Smiths Supervalu in Johnstown before heading for the big smoke in Dublin. The coach was great craic as the lads chanted their county songs and some funny rivalry on the last word of “Come On You Boys In …… Green/Blue!!!”. 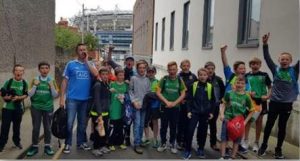 On arrival to the stadium, the Galway fans were fully aware of this coach of Meath/Dublin supporters, as they laughed on the sidewalk to the lads heckles. The lads entered the stadium and took their seats in the Davin stand, spread across two rows in 317 they had a great view of the pitch and the action areas at the goal. The Meath minors entered the pitch, the lads’ eager to show the Walterstown boys their presence in the stadium, held up a homemade banner from Sarah Heffernan “Walterstown U12s”. The match began, so did the chanting and battle cries. The rivalry of fans in the Davin was electric, as a bunch of Galway lads in the back chanted against our boys, who held their own. The Walterstown lads shouted, sang and blew their GAA Hooligan-Horns (The Tank Smith and Bomber Barry). 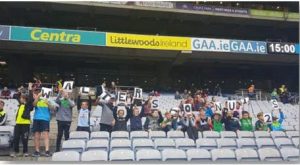 The Meath Minors did brilliantly in the match, but as it came to an end, the Galway team were stronger on the day. The result didn’t dampen the U12 Boys, as they continued to support their club mates’ right up to the final whistle. During the interval of the doubleheader, the lads enjoyed a trip to the GAA museum and skills area upstairs, this was a chance for them to test their skills against each other, Eoin and Alex had a good battle at the high jump and ball catch electronic game. Robbie and Sean demonstrated their quick reaction times in the hurling sliotar light wall. Liam had a fantastic score on the spot running game. Caighlum and Ryan hit some great shots in the football target room. All the lads had a bit of craic in the area before the next match started.

We headed back to our seats and with a quick change/conversion of county colours from Green to Blue/Maroon, the lads were ready for the Dublin v Galway game. The rivalry fun between the boys was great to see, they chanted against each other for every score by Dublin and Galway, and as the atmosphere and adrenaline took hold, one boy asked, “Where do you get the smoke bombs, like hill 16?”. On the trip home we had a get together in Supermacs Navan road, were the lads enjoyed a fast-food meal and chat about the day’s events. 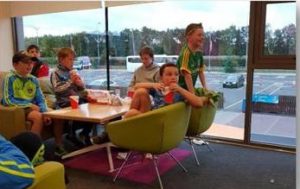 The day finished at 9:30 inWalterstown, were the lads and younger members of the club got to see Adam Barrett arriving home from Croke Park with his dad, Robbie. Big thank you to all involved for making the trip a safe and enjoyable day for this special bunch of lads, who we will see in Croke Park playing for their county someday. Special mention to Paddy Maguire and Stephen Davis for all the help on the day; also to Andy Hennelly for securing the tickets. 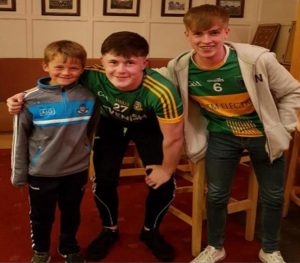