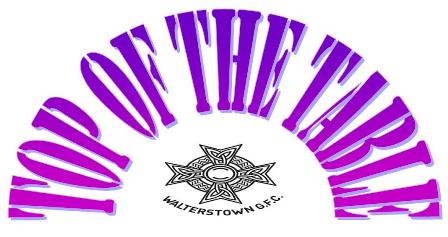 Our lads headed to Ashbourne for an early 6.30pm thrown in. After securing 2 wins form the previous 3 fixtures the Blacks were looking forward to the encounter. Playing against a severe wind in the first half Walterstown found it difficult to contain a strong home team and were second to the breaking ball for most of the opening 25 minutes. With the winds at their backs Donaghmore raced to a large lead and by half time there was 9 points in the difference. The lads knew they were still in this game and even though the points difference was large the second half would prove to be a different game altogether……

The emphasis was on winning ball, securing possession, and forward momentum and the Blacks quickly ate into the home teams lead. In a competitive physical encounter, the Blacks were winning the battle and frees awarded were being converted into scores. Pressing ahead as a unit and with some brilliant team play we had managed to cut the lead to five points with six minutes to go. Two quick goals from Neil McGinley put the Blacks a point up going into the final two minutes. Donaghmore needed a goal. In the dying minutes Walterstown’s keeper Aaron Barry produced two tremendous point blank saves to deny the home team. Another couple of points cemented a remarkable win for the Blacks and propelled them to the top of Division 2. Hon the Blacks