Walterstown faced Inny Gaels in the division two cup final in Paddy O’Brien park on a fine September morning on Saturday. Inny Gaels were a team who have been promoted twice in the last two years and who also enjoyed success at this year’s Feile, so a good game was guaranteed from the off.

The first score of the game was registered by Inny Gaels two minutes after the throw in and both teams matched each other equally during the opening exchanges. The defensive line of Conor Soady, Brendan McGuinness and Patrick Davis had a busy time trying to keep the forward line from Inny Gaels from breaching Conor Reilly’s Goal. But the Walterstown forwards duo of Sean Cassidy and Neil McGinley were to be a thorn in Inny Gaels side as they both registered a brace apiece during the first half, ably complimented buy the midfield of Ciaran Cox and Adam Murphy, and the half forward line that included Byron Farrell and Padraig Freeman. Walterstown went into the break four points to the good. 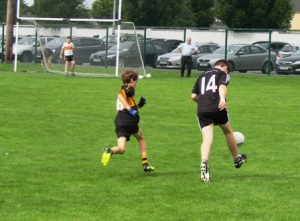 After a very bright start from Inny Gaels the match was tied again shortly after the restart when Inny Gales registered a goal and a point in the opening two minutes. But Walterstown were resolute and it was again the front two of Cassidy and McGinley who tormented Inny Gaels with Cassidy bringing his total to 3 goals and Neil McGinley brining his goal tally to five for the game that ultimately secured the win for Walterstown. With eight minutes to go and a 10 point lead the as Inny Gaels realised goals were the only way back, Oisin Perry , and Lorcan O Conor chipped in with penetrating runs into the Inny Gaels half  to relieve the pressure on defenders but Karl Cooney and Daire Cosgrove were doing a fine job of keeping Inny Gaels at bay, coupled with some good points from the blacks including a nicely taken point from Charlie Reilly. Then with the clock running down Walterstown Coaches emptied the bench to bring on fresh legs and bring home the cup to Oldtown.

It was a great team performance from the lads, who all worked hard and supported each other very well and there coaches will be delighted with the effort they had put in. 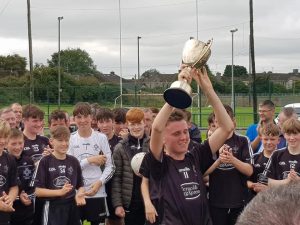