U15 Boys book place in Division 1 next season with impressive league final win.

With the temperature a cool 3 degrees last year’s O’Brien Cup winners faced Senechalstown in the under 15 Division 2 League Final on Friday in Dunganny. After a tough semi-final win against Simonstown the blacks faced another Navan team in the Final, and both side lines were packed with supporters.

Walterstown got off to a flying start, point three times in the opening three minutes via Byron Farrell, Adam Murphy & Ciaron Cox who were superbly supported by Charlie Reilly & Sean Cassidy. Senechalstown scored their first point of the game five minutes in from a free from Robbie Finnegan. Walterstown were controlling the opening half and Neil McGinley Adam Murphy and Padraig Freeman further extended their lead with well taken points. The half back line of Lorcan O Conor, Patrick Davis and Luc Doyle were defending well and keeping Senechalstown at bay, this was underlined by the fact that their neighbours only scored once from open play during the first half. As the half was drawing to a close Senechalstown twice came close to getting the opening goal of the game, with one effort coming off the posts and the other cleared off the line by Conor Soady. Adam Murphy scored the point of the half, after running half the length of the pitch and slotting the ball over the bar. This was quickly followed by the only goal of the game, as Walterstown captain Byron Farrell calming slotted the ball into the back of the net just before half time to give the blacks an eight-point lead at the interval. 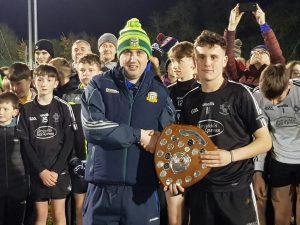 who was demonstrating that he seldom missed once given the opportunity. Walterstown were not going to let their lead slip though, as in-form McGinley & Farrell pointed again. Walterstown were still dominating the play, with midfielders Sean Cox and Oisin Perry controlling the centerfield. The next three scores though were all for Senechalstown, but Walterstown kept their heads and the unstoppable McGinley scored two more points for the Oldtown team, one via a free, the other, despite falling, still managing to place the ball over the bar. Caoilinn Campbell O Brien replaced the battling Brendan McGuinness with ten minutes remaining. Senechalstown increased the pressure but again the full back line of Soady, Cosgrove and Campbell were equal to the task, and Conor Reilly was solid between the posts. Senechalstown desperately sought goals in the closing stages but the final score was a calmly struck left footed point from the boot of Lorcan O Conor, ensuring victory for Walterstown.

Ian Reilly, along with selectors Andy McGuinness, Darren Mulligan and Ger Soady will have been delighted with the excellent all-round performance of the team, and its was smiles all round despite the cold as Walterstown claimed a second important victory inside a week.