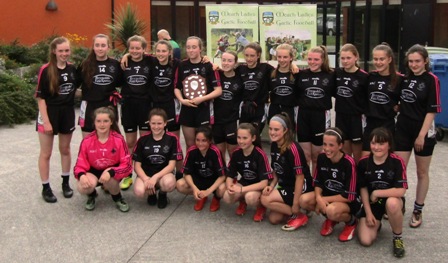 On another glorious June Sunday these local rivals locked horns again in the Division 1 Shield Final. 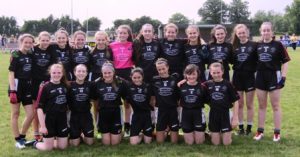 Walterstown got off to a flying start when Walterstowns Emma Kelly slotted the ball into the net with Walterstowns first attack and before one minute had elapsed. Seneschalstown responded with two points of their own before three points in a row from Walterstown, courtesy of Sarah Hussey, Sarah Jane Lyons and Katie McCarn. After a quick break for water ,Seneschalstown hit back  with their first goal of the game and there was little to separate the teams . Further points from Emma Kelly and Michaela McMahon saw Walterstown re establish their three point lead, only to have it wiped out by Seneschalstown’s second goal of the game just before half time. The sides were tied at the break, 8 points apiece. 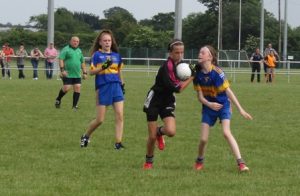 If Walterstown had a good start to the first half, they bettered it in the second half, when once again Emma Kelly found the back of the net, again before a minute had elapsed. This was followed up immediately by another goal for the blacks, with Jennifer Lynch slotting home Walterstowns third goal. Once again Seneschalstown fought back and scored their third goal. However the game swung firmly in Walterstowns favour when Emma Kelly grabbed her hat trick 8 minutes in to restore Walterstowns six point lead, a lead they would defend stoically until the end. The heat was playing a factor now, as both sides emptied their benches, excellent points from Michaela McMahon and Katie McCarn confirmed Walterstowns lead and they ran out seven point winners.

It was a fantastic team effort from all the girls, with great displays all over the field, from defense to attack, and their performance on a very hot afternoon must have delighted the coaches, Ciaron, Susanne, Thomas and John. Well done to all. 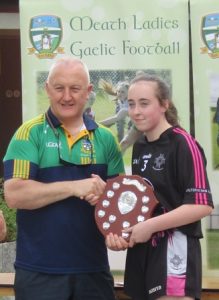