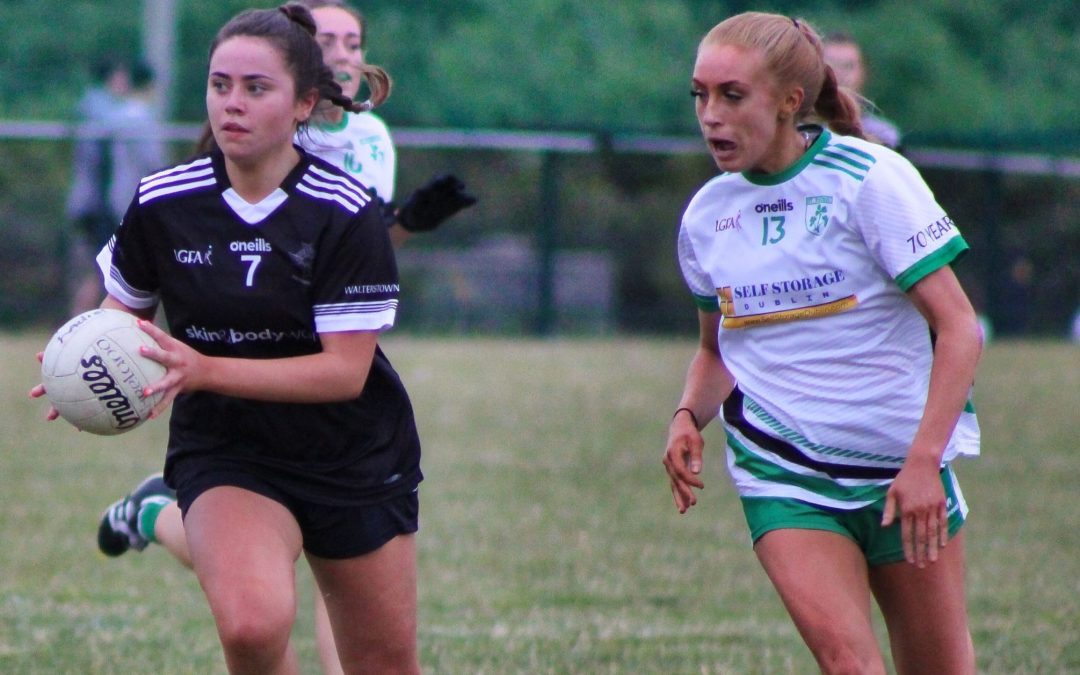 Cruel. Quite literally the only term that can be used to describe the ending to last night’s Masita Cup final in Stamullen. Two points to the good deep in to stoppage time in the second half of extra time and St Pat’s are awarded a free. With no option but to drop a long ball in, the home side somehow managed to hit the back of the net. And that was that. A one point victory for St Pat’s and sheer desolation for Walterstown.

However, the agony of last night just may be a gateway for this young team. They travelled to Stamullen as serious outsiders, however played like they were anything but. In fact, for long long periods in this game the Blacks were the better team. Their work rate for each other was immense, their football top notch and as the curtain is closed on the 2022 Masita Cup, the next race begins; the race for the Junior A Football Championship, which gets underway in a few weeks time.

Wednesday’s final was a tight and tense affair for the duration. When one side enjoyed a purple patch, the other assumed control and brought it back to being neck-in-neck once more; enthralling from the off until the end.

Walterstown booked their place in the final by overcoming a fancied Trim side away from home in the penultimate round. And once again, they weren’t fancied for the decider but underestimate this group of players at your peril.

Under the guidance of coach Andy McGuinness in the absence of manager Joey Farrelly due to holidays, Walterstown drew first blood when full-forward Lisa O’Neill raised a white flag. However the home side responded with three points on the trot and led 0-3 to 0-1 with only five minutes played.

O’Neill brought it back to a one point game soon after but a converted free and one from play from St Pat’s saw them open up a 0-5 to 0-2 advantage but as the first quarter drew to a close Helen Lenehan split the posts to reduce the deficit.

It was nip and tuck right the way through the first half and the Stamullen girls struck next to go three ahead before Walterstown enjoyed a spell of dominance.

The Blacks came agonisingly close to hitting the net of two occasions but the upright came to St Pat’s rescue. However, the visitors did hit the next five points without response. Lucy Reynolds, Julie Donnellan (free), and three from the boot of Lisa O’Neill saw Walterstown leading 0-8 to 0-6 as the first half headed in to time added on. Before the interval Pat’s grabbed one back and just one separated the sides at the break.

Former Meath U16 star Lucy Reynolds ensured a super start to the second half for Walterstown when she got on the end of a pass from Lisa O’Neill and struck to the net to open up a 1-8 to 0-7 lead for the Blacks.

But back Pat’s came. They had the ball in the back of the Walterstown net in the 38th minute and before that hit a brace of points to open up a lead of one (1-9 to 1-8). And with that goal came confidence and a further lead. With 21 minutes of the second half Pat’s led 1-12 to 1-9 with Walterstown having lost Antonia Brady to a yellow card early in the half.

That three point lead was the sword that awoke Walterstown’s spirit and what a finish to the second half they enjoyed.

A super long range point from Helen Lenehan came before one from captain Mollie Browne. The latter was on the end of a quick free taken by midfield dynamo Isobel O’Connor and Browne duly delivered to leave her side trailing by just the minimum.

In the last minute of normal time the home side gave themselves a two point cushion but Walterstown weren’t done just yet. Quite the contrary in fact.

When Lisa O’Neill was impeded down the other end experienced Julie Donnellan popped over the resultant close range free. And then came the late drama. Moved from centre back to centre forward, former Meath minor star Mollie Browne was tackled unfairly and the referee signalled for a free. Up stepped Lisa O’Neill with the pressure kick and she came up trumps, splitting the post with the last kick of the game.

Despite fading light extra time beckoned and Pat’s nudged themselves in front three minutes in but the remainder of the first half saw Walterstown dominate. Both Julie Donnellan and Lisa O’Neill raised white flags and the visitors led 1-15 to 1-14 at half time in extra time.

A minute in to the final half Lucy Reynolds added to her tally and that point turned out to be one of only two scores in that second half. Both teams had opportunities but Walterstown clung on to a two point lead as the clock ticked down.

This game was epic in nature and it provided drama right up until the death. And that drama delighted Pat’s in stoppage time. They won a free and had no option but to go long. With little or no light the ball made the way in to the Black’s net and that was that.

As we said at the top – cruel, a bitter pill to swallow but disappointment is simply a temporary obstacle along the road girls!

Up next for the Blacks is the all important Junior A Football Championship where Walterstown will take on Duleek-Bellewstown, Moylagh and St Ultan’s in group 1.

Head on over to our Facebook page for loads more action shots from the final.