On a fine summer Sunday evening neighbouring clubs Bective and Walterstown made the short journey to Trim for the Division 2/3 Playoff. In near idyllic conditions on a perfect playing surface this would be a straight shoot out to determine who would be in the second-tier next season. Walterstown had two changes to their regular starting fifteen, with Ciaran Lydon coming in between the sticks and Cathal Hennelly providing the cover at centre back.

Walterstown got off to the start they desired, with an opening point from Mark McCormack, which was quickly followed by another via the boot of Barry O Connell. Bective responded with their first point from play two minutes in, but this was quickly cancelled out when Conor Farrelly raised the white flay for the black’s moments later. Walterstown were beginning to dominate the possession now and corner back Colm Reilly was next to add his name to the score sheet, sandwiched either side of two Bective points. Midway through the first half, Bective made their first substitution, in what was a tactical change, an effort to curtail the impressive Conor Farrelly, who was having a fine game. Walterstown still had the upper hand though and reeled of four points in a row, thanks to Alban Crosbie, Aron McLoughlin, Colin McGrane and Brian O Connell, and in truth the blacks should have been further ahead with some clear-cut goal opportunities missed.  Bective however, with the clock nudging the thirty-minute marker, unlocked the Walterstown defence and raised the green flag to reduce the blacks lead to three points at the interval.

Typically Walterstown have had strong re-starts after the break this season, but Bective left them a little shell 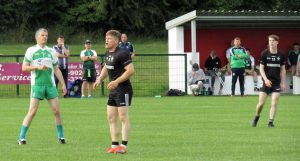 shocked, as they fired in two goals in the opening two minutes, to take the lead for the first time in the tie, and indeed they almost had three goals in three minutes but Ciaron Lydon was equal to the challenge. Slowly Walterstown began to regain their composure and Aron McLoughlin raise the white flag for Walterstowns first score of the second half. Alban Crosbie and Conor O Sullivan were starting to dominate the midfield and despite Bective’s good opening start it was all Walterstown again as they reeled of five un-answered points from Alban, Brian O Connell and John Geoghegan, to restore their half time lead. Bective got their first point of the second half eighteen minutes into the second half but it was a rare excursion into the opposition’s half at this point. Walterstown brought on Sam McCabe for Adam Treanor, as Mark McCormack and Alban Crosbie completed the scoring for the blacks, with a four-point win as Keith Sheerin blew the final whistle and Walterstown confirmed their place in Division 2 for the 2020 season.

Joe Treanor and Martin O Connell were delighted with the result, team effort and performance, yes scores were left behind, but Walterstown were the better team on the day and deserved the win, as travelling supporter showed their appreciation as the clapped the players off the field. And so, after a year in Division Three the Blacks are back in Division Two.