Walterstown return with a win over Dunderry in AFL Division 2B 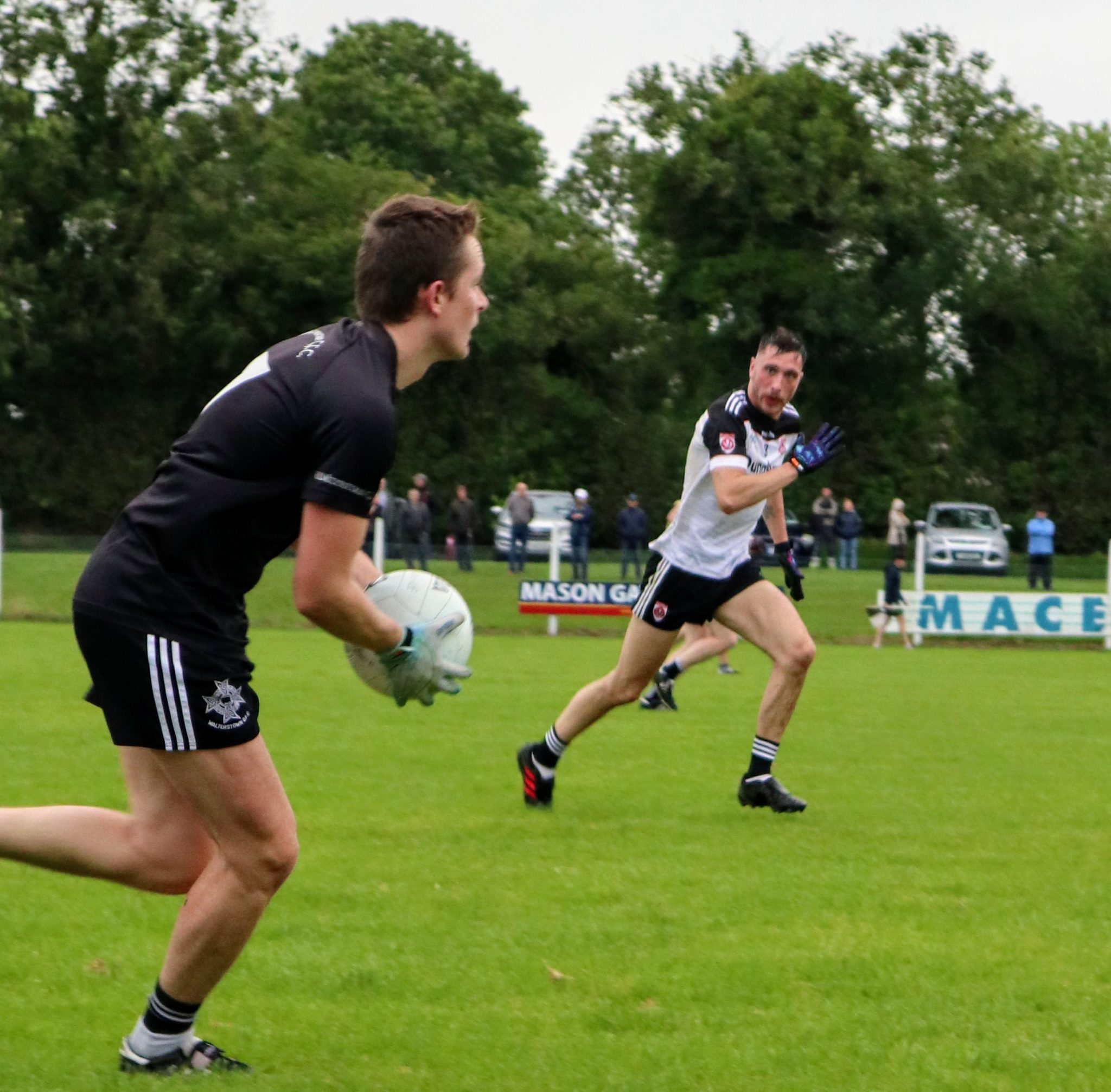 Walterstown had a winning return to action and to Division 2 when they overcame Dunderry at home last Friday evening. Having started superbly, Martin O’Connell’s side leaked 1-8 without reply but finished strongly to secure the two point victory.

Playing without their captain Alban Crosbie, the experienced Johnny Geoghegan and Meath U20 man Conor Farrelly, the Blacks dug deep to grind out the win. They started brilliantly too and had seven points on the board before Dunderry even opened their account. The superb Ruairi O’Dowd bagged the games’ first score before Brian O’Connell converted a free from the left. This was O’Connell’s first game back after a lengthy lay off with a cruciate injury and his return is a huge boost to the Walterstown attack. 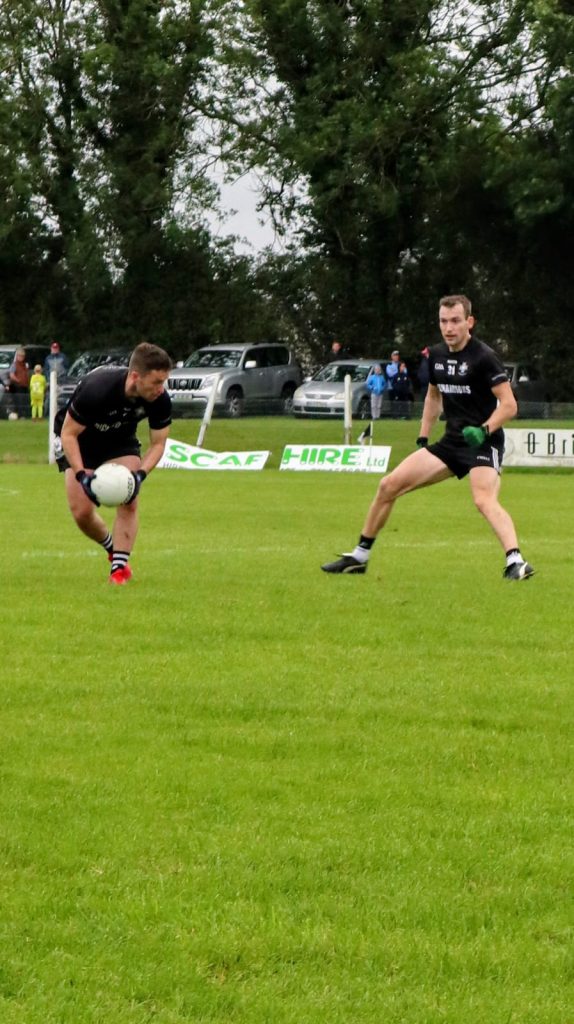 Walterstown’s Paul Donnellan in possession as Cathal Hennelly looks on during their AFL Division 2B against Dunderry in Walterstown on Friday evening.

New boy Robbie Cunningham and wing back Colin McGrane combined well before the latter split the posts to put his side four to the good. Thereafter O’Dowd, Mark McCormack, Brian O’Connell and Cunningham all raised white flags to leave the home side leading 0-7 to 0-0 with twelve minutes played.

Then came Dunderry’s purple patch, as they took charge. A free from the hands of Dermot Kelly got them off the mark and just four minutes later the deficit was down to just three. Conor Daly certainly made his mark with a point on 19 minutes and soon after he hit the net after getting on the end of a long ball in from Conor Leavy before hitting the ball low passed Blacks’ ‘keeper John Davis. The goal left Dunderry leading by the minimum with ten minutes of the first half remaining.

They weren’t finished there either. Before the interval Daly converted a free and set up Conor Farrell for another point.

The visitors stretched their lead to four by the 23rd minute thanks to a point from 40 metres out from the boot of Luke Marytn. 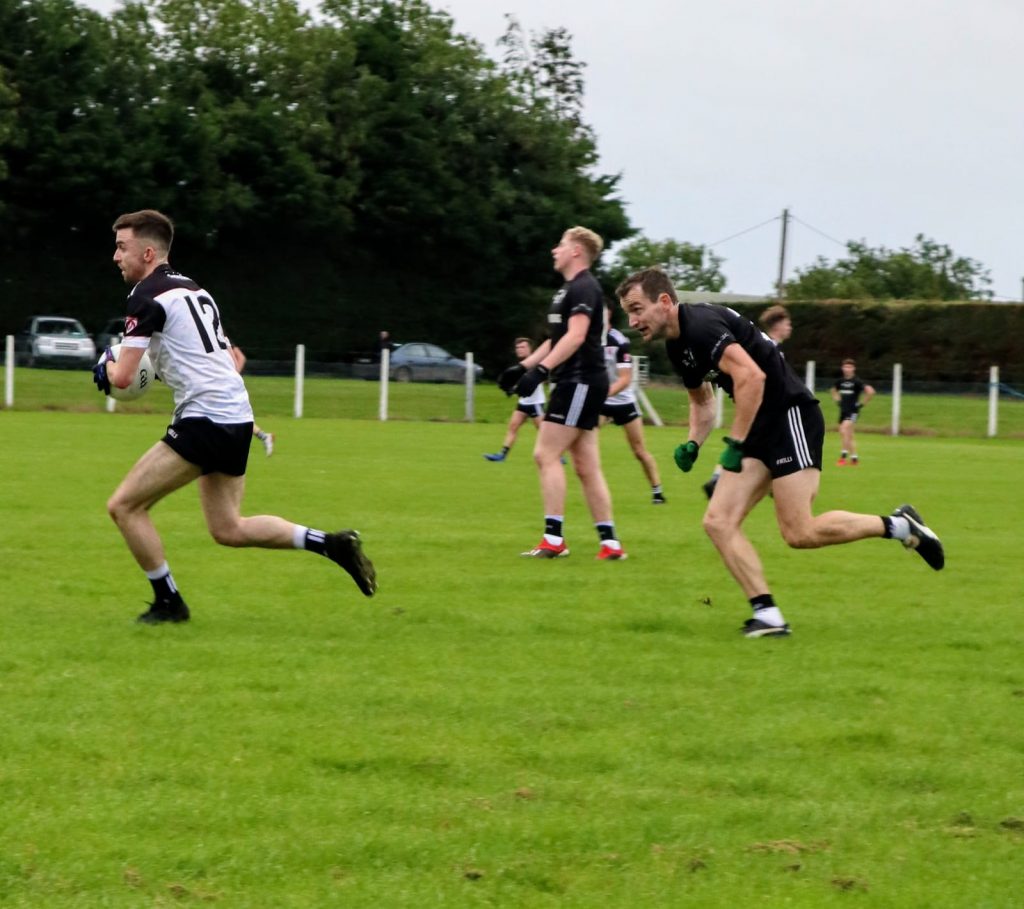 Dunderry’s Marc Kane gets away from Walterstown defender Cathal Hennelly in their AFL Division 2B against Dunderry in Walterstown on Friday evening.

Walterstown enjoyed much of the possession for the remainder of the half but they couldn’t make it count on the scoreboard. Indeed, O’Connell’s men were very wasteful in front of the posts and should not have been as far behind as they were at the break. At the interlude Dunderry led 1-8 to 0-7.

Soon after the turnaround Walterstown had the deficit down to three when midfield man Barry O’Connell fired over, while his brother did likewise soon after.

The leveller also came from the younger of the two O’Connell brothers and by the 45th minute the Blacks were back in front thanks to a point from Paul Donnellan.

Walterstown finished strongly and try as they did, Dunderry weren’t able to claw it back. So a two point win for the Blacks, a decent display but room for improvement as they travel to Trim for round two on Wednesday.

and by the twelve minute mark Walterstown were in flying form, leading 0-7 to 0-0 thanks to