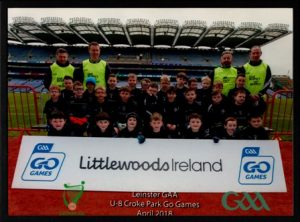 On Wednesday our Walterstown GFC’s U8’s proudly represented the famous black jersey at Croke Park as part of the Littlewoods Ireland GAA Go Games event.  The U8’s got a chance to play on the hallowed turf against Straffan GAA – Kildare.

It was a fantastic day with two competitive games.  The matches had some great skills on show from both teams and we were very proud of our Walterstown GFC boys as they represented the club with a great level of skill and sportsmanship.  Well done to all the players.

After the match they all got a chance to climb the steps to lift the cup and even engage with some post match interviews.

Once all the ceremonies were complete, we boarded the bus and headed to Supermac’s for a well deserved lunch and ice cream.

Thank you to all the parents, family members and friends who turned up on the day to cheer on the team.  It was a super turnout and it created such an amazing atmosphere for the team.  The day will live long in the memories of the team and I don’t think it will be too long before we see this group of boys lining out again in Croke Park.

Thanks to the following : Croke Park, Leinster GAA , Littlewoods Ireland, our coaches on the day Gareth , Aaron, Owen and Donal, the parents and most especially the players.