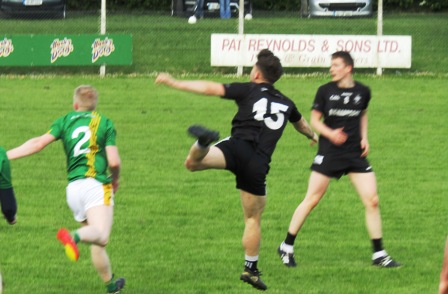 Castletown travelled to Walterstown on Sat evening for this 8th Round A League Match. With 2 wins so far Walterstown were badly in need of another win.  Playing with the wind the home side started brightly scored the first 5 points thanks to 2 from Ruairi O Dowd and 3 from Brian O Connell. Castletown then got off the mark with a goal and were only a point behind after 15 minutes. Walterstown defended well and only allowed Castletown 1 more point before half time. Meanwhile Alban Crosbie and Mark McCormack gained control for the Blacks at mid-field. Up front Walterstown’s forwards continued to pile on the pressure with further scores from Brian O Connell and Ruairi O Dowd while Alban Crosbie, Robbie McDonnell (2) and Cathal McGuinness also contributed points. When Gerry McGivney blew for half time the score read 0-12 to 1-2. 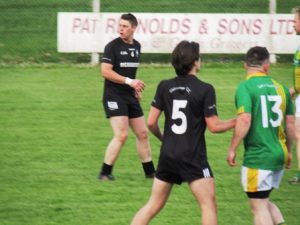 No 5 Catahl McGuinness had an impressive game for the blacks.

In the second half though now playing into a strong wind Walterstown scored the first 2 points and from this point Castletown’s chances of a comeback looked doubtful.  They did score the next 4 points to narrow the gap but then after 20 minutes Robbie McDonnell found Brian O Connell unmarked in front of goal, who duly netted. McDonnell pointed again and Walterstown ran comfortable winners on a score line of 1-15 to 1-7