Win for the Blacks in first game under lights at home 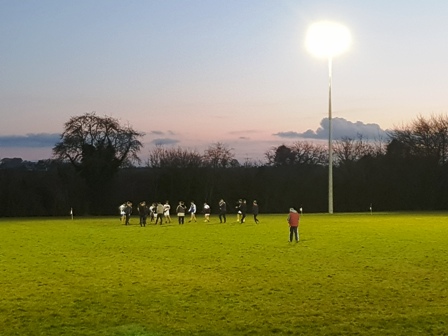 Walterstown played Oldcastle in Walterstown on Saturday evening. This was the first match played under their new Floodlights installed last Autumn. Walterstown had several experienced players on their team but also had several young players making their adult team debuts. Walterstown got off to a great start and had scored 3-3 before Oldcastle registered their first point after 15 minutes. Paddy McCabe scored 1-1 of that. Sam McCabe and Aron McLoughlin added further well taken goals. Oldcastle continued to work hard but wasted scoring opportunities. Walterstown were 3-6 to 0-3 ahead at halftime. 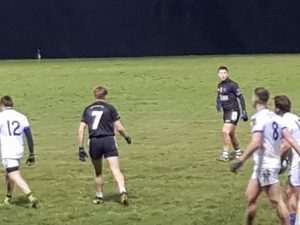 In the second half, Walterstown continued to dominate and when John Geoghegan added their fourth goal the game was effectively beyond Oldcastle’s reach. In defence Walterstown worked hard. Darragh Keegan was excellent in goal while the Oldcastle attackers found it difficult to get past Cormac Freeman, Dan Halligan and Conor Lenehan. Eoin O Mahony and Colm Reilly added their experience  to the defence. Joey Coogan and Conor O Sullivan got the better of the midfield exchanges. In attack veterans John Geoghegan and Aron McLoughlin combined well with the younger lads, John scoring 1-2 while Aron added 1-1. Sam McCabe scored an impressive 1-3 for Walterstown. When referee Martin Dawson blew the final whistle, the score was 4-11 to 1-4 in favour of the home side.