Win for Walterstown in Round 1 of the Corn Na Boinne 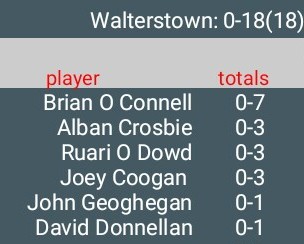 Walterstown travelled to Carlanstown for the first round of the Corn Na Bóinne last Saturday night. They must have felt some trepidation as they had not won at this venue for the last couple of years. On a cold night under lights, both sides deserve great credit for serving up a very entertaining fast moving match. 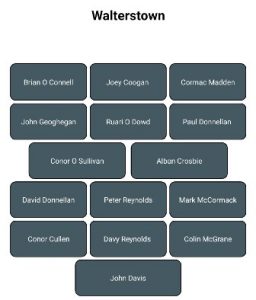 Walterstown got off to the better start and were  5 points to 3 ahead after 15 minutes with  3 of the Walterstown points coming from the boot of Brian O Connell. However St Michaels came back into the match and were only a point adrift at halftime with the scores at 8 points to 7.

For the first 10 minutes of the second half there was still only a point between the teams in this hard fought contest. In the last quarter, however, Walterstown tightened up their defence and Alban Crosbie and Conor O Sullivan got control at mid-field. Then they slowly stamped their authority on this match thanks to nicely taken points by Ruairi O Dowd, Alban Crosbie and Brian O Connell. Walterstown’s corner forward, Joey Coogan slotted the last 2 points for the Blacks to leave the final score at 18 to 13 in their favour.