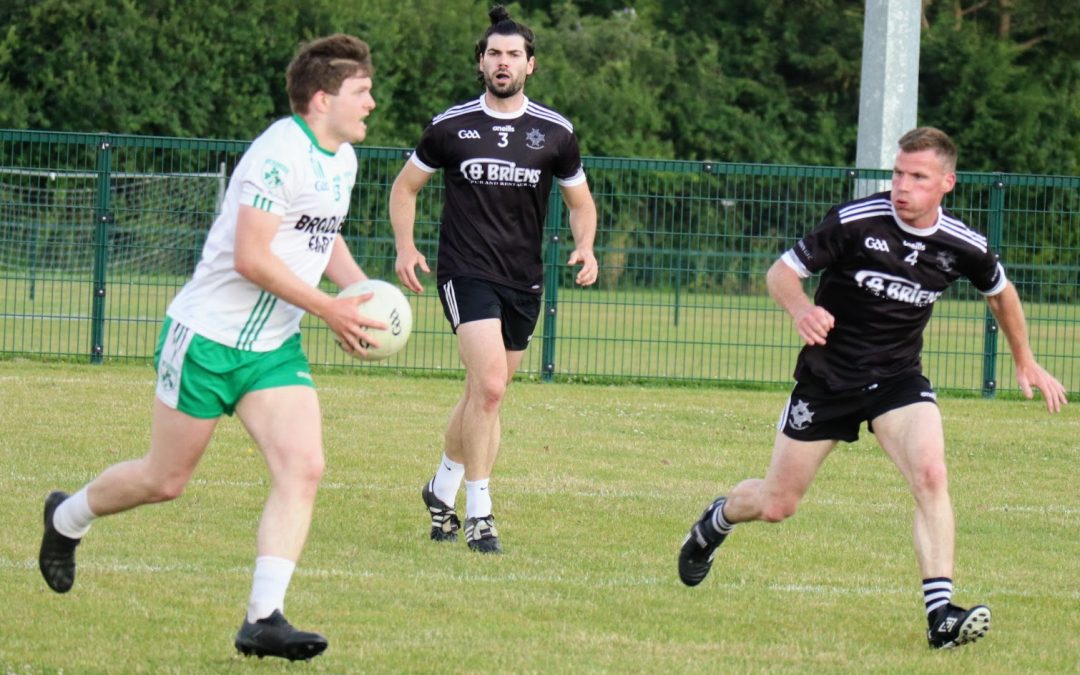 A converted free late in the day from Stephen Davis earned the Blacks a share of the spoils in the final round of the Corn na Boinne Group B against St Pat’s on Wednesday evening.

Corn na Boinne Group B Round 5

Although the home side had already advanced from the group and despite the fact that the Blacks had nothing to play for, this was one seriously entertaining game of football on a beautiful sunny evening in Stamullen.

Walterstown welcomed back Sam McCabe to their attack for the first time this year after an injury lay off, while Adam Barrett got his first start of 2021 and did very well in the half forward line. However, they lost both Peter Reynolds and the influential Barry O’Connell to injury on Wednesday evening and they will be hoping for a good outcome for both as championship football approaches.

Playing without the services of Conor Farrelly, Davy Donnellan, Alban Crosbie and Cathal Hennelly, Walterstown could have easily come away with a victory from this one. They had the chances but failed to take them. Indeed, the same can be said for the home side also, so in the end, a point each was probably the most fair result.

Walterstown welcomed back Sam McCabe to their attack in Stamullen

The sides were level at the death and also level at the interval (1-10 to 2-7) but Walterstown should have been in the lead at the break. They hit three wides on the trot between the 27th and 30th minutes, while Adam Treanor’s attempt at goal was saved by ‘keeper Philip O’Brien.

Before that though, the visitors had a real purple patch when they hit five points without response; this coming after St Pat’s nabbed a second goal after 20 minutes.

The home side drew first blood with a point after four minutes but Ruairí O’Dowd soon cancelled that out when he split the posts a minute later. The Blacks’ centre forward collected possession from Alan Wall out on the left wing before cutting inside for the score.

Pat’s went on to register the next three without reply but points from the in-form Aron McLoughlin and Brian O’Connell (free) had it back to a one point game after nine minutes.

That was short-lived, however, because the home side nabbed a goal, courtesy of Liam Brennan in the tenth minute to leave the score at 1-4 to 0-3.

For the remainder of the opening half Walterstown dominated. O’Dowd tagged on a point before the returning Sam McCabe pounced for a goal right before the first half water break, which left the scoreboard reading 1-5 to 1-4 in favour of the home side.

Soon after parity was restored thanks to a Barry O’Connell point but then all the Blacks’ hard work was undone when Neil O’Flaherty was allowed in for goal with 20 minutes played to leave the score at 2-5 to 1-5.

Four points in a row saw Walterstown turn things around thereafter, however. Barry O’Connell raised a white flag after a really patient build up, while Sam McCabe, Adam Treanor and Brian O’Connell (two) added points and gave the Blacks a 1-10 to 2-5 lead five minutes before the break.

And then some poor shooting came in to the equation and allowed Pat’s bounce back and ensure the sides were level at the interlude. Liam Brennan converted a free out of his hands from the edge of the ‘D’, while he also tagged on one from play and that left the teams neck-in-neck (1-10 to 2-7) at half time.

A point, courtesy of a Shane Landy free, edged the Stamullen boys ahead two minutes after the turnaround and when Walterstown failed to convert down the other end they were duly punished by the home side. Liam Brennan split the posts just seconds after Walterstown squandered yet another goal chance and that left the scoreboard reading 2-9 to 1-10.

It wasn’t until the midway point of the second half that Walterstown managed to draw level again but even then Pat’s nudged themselves back in front when both Shane Landy (free) and Brennan raised white flags.

Full forward Brian O’Connell played a pivotal role for Walterstown in the final few minutes. Firstly he sent over two frees before being fouled out on the right, which led to Stephen Davis sending over a late leveller and earning the draw for O’Connell’s men.

Walterstown showed some great patience when both in possession and when not and although they were guilty of heading for goal instead of taking the easier option, their performance was an encouraging one.

The Blacks still have the 2020 Corn na Boinne final against Castletown to come and of course the small matter of the IFC, where they find themselves in Group C along with Syddan, Meath Hill and Oldcastle.